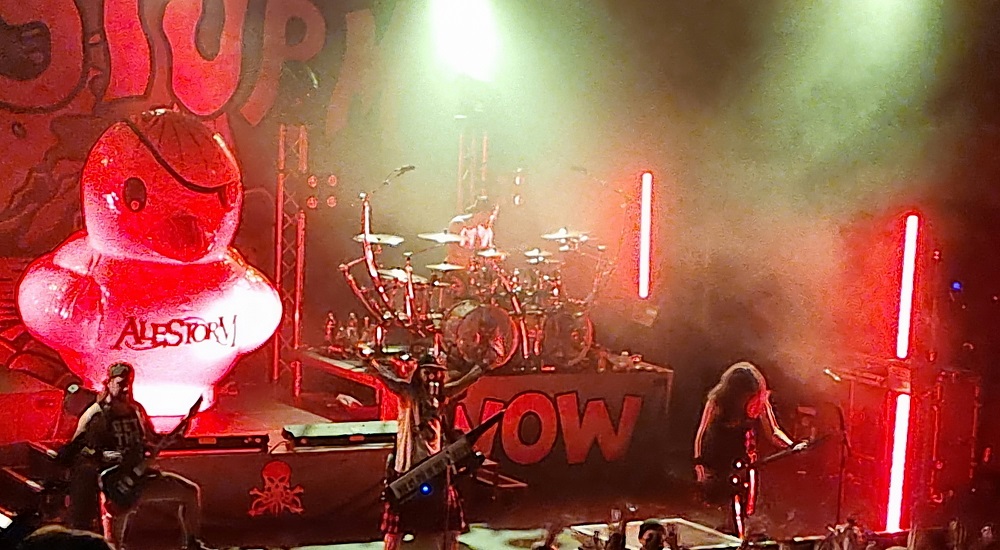 It says much for this bill that Bootyard Bandits are arguably the most sensible band on it, and yet at one point in their half an hour they play a song called “Shirt Potatoes” and there’s a “Heavy Metal Banjo” section, where they play bits of “Smoke On The Water”, “Master Of Puppets” and “Thunderstruck” as the way they (weren’t) intended. For all of that though, they are a proper Southern Rock band, just on their own terns and without taking it too seriously. “Let’s Rodeo” is as catchy as it gets and “Hoedown Showdown” showcases a band that’s getting better and better. Joel Peters was last seen the other week as the singer in the current version of Phil Campbell And The Bastard Sons and he has a real confidence that seems to have transferred to the whole band.

Trying to put a Gloryhammer show into words is a terrible job. Indeed, I’d argue it is basically impossible. It starts with a cardboard cut-out of Tom Jones and ends by crowning the new king of somewhere or other (Dundee I think, I don’t know) while the crowd chants “hoots! Hoots!” What happens in between – give or take the odd bloke walking about with a Glory Hammer to win fights – is that some brilliant (and brilliantly ludicrous) power metal songs break out. Angus McFife, the singer, has gone and in his place Sozos Michael has arrived. Other than that, its business as usual, as “Gloryhammer,”, “Land Of Unicorns” and “The Hollywood Hootsman” are better than they have any right to be. That can be applied to the band in every sense too. “Hootsforce” and the apocalyptic “Universe On Fire” are as good as this power metal can get. “Unicorn Invasion Of Dundee” stands head and shoulders above all their tunes though and it does its mighty thing as ever. Gloryhammer are unique. Other bands would – if they could – sound like them, but it’s futile. Everyone else is too puny and weak, frankly.

Christopher Bowes is a busy boy. He’s  Zargothrax,  Gloryhammer’s keyboard player and he’s the singer (and Keytar player) in Alestorm. Lets just think about this for a minute. I first saw them about a decade ago and they were fun. The joke wasn’t necessarily meant to last. It has, and its not just lasted, its exploded. This is in the massive room at The Academy, and you can look around when they play their last song and there’s people singing the song into their phones – with actions. That song is called “Shit Boat (No Fans”) and the chorus of the track goes “your Pirate Ship can eat a giant bag of dicks”.

They might play Q***n for the half an hour before they come on, but everything about Alestorm’s 90 minutes is glorious after that. From “Keelhauled” to “Fucked By An Anchor” it’s the type of gig where things happen like Luke Phillip from Largerstein popping out for a cover of Taio Cruz’s “Hangover”, before he re-appears to mime to the female vocals in “Zombies Ate My Pirate Ship”. I should add at this point that he’s in a blonde wig and a dress. Oh and Luke’s other name? Beef Guy. He’s about seven foot tall and 20 stone.

Thing is when those things happen, you aren’t surprised. This is a band like no other.

Maybe because they are so “out there” (on the ocean waves?) you tend to focus on those things, or at least the fact that Bowes is basically getting drunker and drunker throughout, and you sometimes need to remind yourself that this is a brilliant metal band. Unless you’re Kiss, you can’t fool people with gimmicks for long. What you need is songs people like. A lot.

And “Mexico” is like a pirate disco, “The Sunk’n Norwegian” is an anthem of the most basic kind, and if you’ve ever wanted to watch a massive bloke dressed in a pirate outfit and balaclava rap, then Captain Yarrface from Rumahoy is here for a bit of “Tortuga”.

The balance is incredible. For every “1741 (The Battle of Cartagena)” there’s a “What Shall We Do With The Drunken Sailor” and they still play their old stuff with a real glee, as “Captain Morgan’s Revenge” very neatly proves.

There’s there’s as much crowd surfing as at a Slayer gig during “Drink” and “Pirate Metal Drinking Crew” is basically well named, and the last one, the aforementioned “…Anchor” sees people literally dance on the balcony.

It’s worth pointing out that while they are dancing, the words are going: “Fuck you, you’re a fucking wanker/We’re gonna punch you right in the balls/Fuck you with a fucking anchor/You’re all c**ts, so fuck you all”.

Explain why everyone loves being insulted? Explain why “Mr Blobby” plays the show out? Or maybe don’t bother, and just accept that Alestorm are a phenomenon.