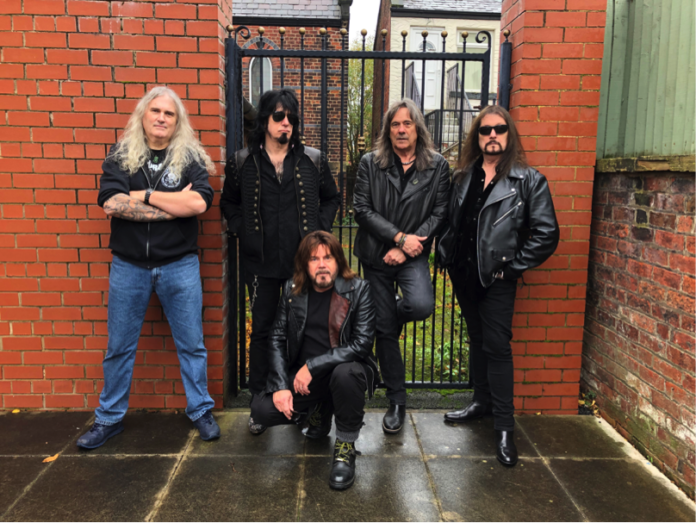 Founding member Gary Shea,AKA ‘the man who named Alcatrazz‘, comments: “Footage for this clip was filmed live from our recent UK Tour in England. After a long lay-off, it was so cool to be rocking hard with vocal king Doogie Whiteand new boy Larry Patersonkilling the drums. We are looking forward to our return to the UK and the upcoming European Tour”

Following the release of the full-length V;ALCATRAZZ,the mighty Los Angeles-born guitar-driven heavy metal icons will take their new record to 16 stages across Europe, kicking off at the Golden Ages Festivalin Belgium. And it’s no rest for the wicked with the band set to bring their electrifying shows to the UK in February 2023, co-headlining with the legendary Girlschool.

Both vintage and timeless, Vtreads the Alcatrazztextured-territories of old but with renewed vigor and verve. Whether it be the choral-echoes sitting inside the storming tempest which is ‘Nightwatch,’ the staunch, speedy melodic metal of ‘Turn Of The Wheel‘ or the thick, bluesy chug of ‘House Of Lies,’ there is little doubt that this Alcatrazzis going full-tilt with not one ounce of a shackle holding them back.

“Vbrings us full circle from our original roots to a modern much heavier version of all things Alcatrazz“,confirms Shea.
“I feel great and I am looking forward to our return to the UK and upcoming European Tour as we continue to work on new music, enjoy the video!”

And just in case you’re wondering what Vstands for? Alcatrazz‘s fifth studio album of course… but it also stands just as resolutely for Victory; the victory that sees Alcatrazz 2021 stronger than ever despite all the odds.

Watch/Listen to the full album Vhere

Formed in 1983, Alcatrazz became famous for its blend of melodic and progressive rock and for introducing guitar heroes Yngwie Malmsteen and Steve Vai. Emerging in 1983 with No Parole from Rock ‘n’ Roll, which featured the hit ‘Island in the Sun‘,the band continued building popularity in 1985 with their sophomore effort, Disturbing the Peace, which contained the hit, ‘God Blessed Video‘. The band issued one more studio LP, 1986’s Dangerous Games, before ceasing operations the following year.  The band regrouped and released highly acclaimed Born Innocent in 2020, their first studio album containing all-new material since 1986.