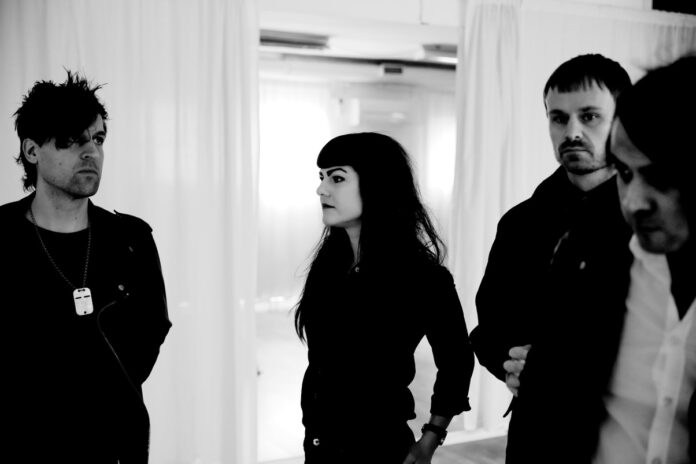 The follow-up to ‘Oceans’, their acclaimed 2017 full-length, ‘Barricades’ is the band’s first album since signing to Metropolis and their fourth overall. From the epic sound of ‘Porcelain’ to the power and sorrow of ‘I Am You’ (to be released as a single later this spring), it displays the full musical breadth of a band that took its initial inspiration from early ’80s minimalist post-punk and goth, plus the lush shoegaze approach of acts from the end of that decade. However, they have also added a glamorous dark pop veneer akin to The National and Suede to create a cinematic and dramatic soundscape built around the warm croon of singer Fernando Honorato.

The quartet’s most intimate album to date, the songs on ‘Barricades’ have grown out of melodies and chords rather than guitar riffs, while lyrically Honorato has also sought new paths, with elements of hope in words that may previously have appeared hopeless and bleak.

As with new records by many other acts, ‘Barricades’ is an album deeply affected by the Covid pandemic, with most of its songs recorded from home and the group members providing their individual contributions in isolation. However, this has in turn given the album its own uniquely special atmosphere. “I’ve had more time to reflect freely both in terms of lyrics and recording and have been able to try different things. I knew exactly what I wanted to do,” states Honorato.

Although Principe Valiente has previously been seen as something of a solo project for the singer, this time around all four group members – Honorato, guitarist Jimmy Ottosson, keyboardist Rebecka Johansson and drummer Joakim Janthe – have made contributions. “There are more ideas coming together now. Everyone has added their own perspective to the songs and it is much more of a collaborative effort. Our records never turn out the way we imagine when we start working on them, but I’m very happy with ‘Barricades’. It feels like it’s the best album we’ve made so far,” the singer concludes.

As the world finally reopens after two long years, Principe Valiente is fully ready to embrace the new opportunities this offers them.