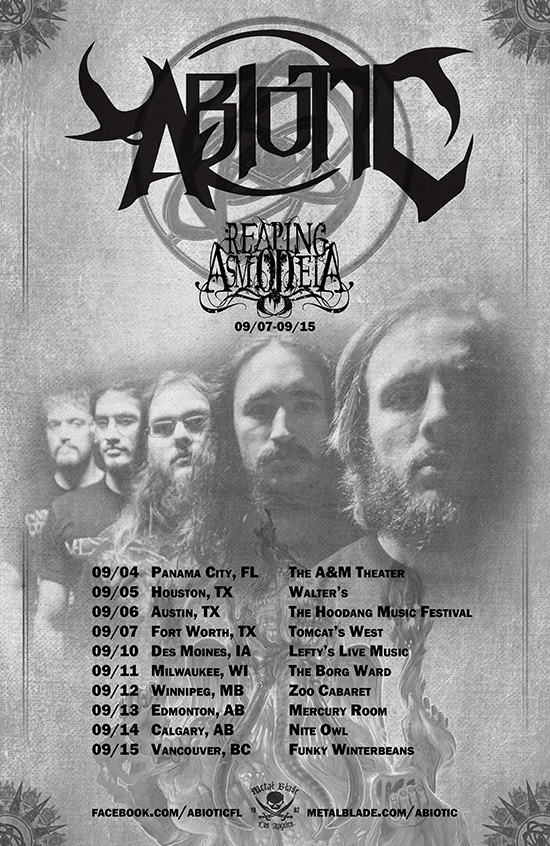 US Tour starts next week

Abiotic will be back on tour beginning September 4th! The Florida natives heading out on a two week trek and will be joined by Reaping Asmodeia on shows beginning September 7th. More dates are still TBA, and the confirmed listing is below. Follow facebook.com/abioticfl for updates.

Abiotic released their sophomore album Casuistry in April on Metal Blade Records. It cracked two of the Billboard Charts and landed at #50 on the Current Hard Music Album Chart and #68 on the Billboard New Artist Chart. Casuistry is available for purchase at metalblade.com/abiotic. While there be sure to check out the stream of “Cast into the Depths“, featuring Dying Fetus front man John Gallagher on guest vocals.

In 2014, Abiotic re-tooled their line up by adding vocalist Travis Bartosek and drummer Brent Phillips. In the late summer of 2014, the band ventured to Basement Recordings with acclaimed producer Jamie King. The collaboration would prove fruitful. Guitarist John Matos elaborates: “Working with Jamie was unlike any other studio experience we’ve had before. Tracking with someone who’s produced bands like Between the Buried and Me, Wretched, and The Contortionist put our minds at ease and allowed us to put total trust in Jamie to achieve the sound we were looking for. It made the experience so comfortable and relaxed that we were really able to explore and create without boundaries. I think that’s something that can be felt with this record.“