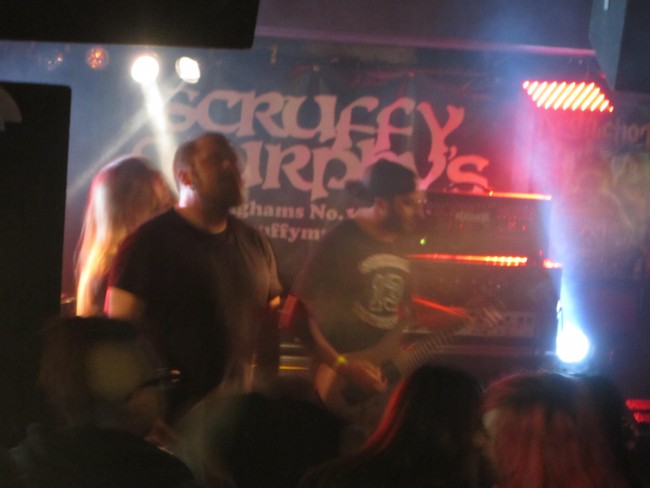 Cairo Sun hit Birmingham, and MVM’s Damian gets along to see what the fuss is about…..

Opening tonight are Cairo Son, the London band who very recently played the MVM showcase night. Their set begins with the intricate title track “Heart Against The Feather”, followed by another song from the debut album called “Now That You’re Here.”The band are at times a little proggy and sometimes seem to have a seventies vibe, which I love. Tracks off the album like “Confession”, “Troubled Man”, “Promises” and “I Was Wrong” prove what a great band they are.

Next up are another band from London, Army of One, who have been sharing this tour with Cairo Son. I was really blown away by singer Silva’s vocal range and effort he put into the show. All tracks from their debut EP got an airing tonight. “A Hero’s Welcome” being a great introduction to the band, this being followed by a new song “Wrong Kinda Right”. “Beautiful Riot” comes next with a wonderful guitar edge from Steffen sounding a little like the multi-faceted brilliance of A Perfect Circle.“Civilian” is a real crowd pleaser and I could see this going down a storm at a festival, similarly “Outside The box / Inside the ring” is almost anthemic as it thumps home. “One trick pony” is a track that highlights the engine room of Marcin on Bass and Danny on Drums. This band may show their influences of Soundgarden and Alice in Chains, Army Of One very much have their own battle plan.

A Tower Of Crows, who top the bill tonight are a five piece band from neighbouring Coventry. They have heavier intent than the previous bands and headed straight into “River Runs Red”, followed quickly by “Hang Mans Eyes” and “ Masquerade.” Sam Clay on vocals has that dark, malevolent voice that really suits the more stoner type rock music that we are offered here tonight.  “Shades Of The Righteous”, “This Machine” and “Dusty Thrones” follow before we get a new song in the shape of ”Lay them low” “In satin” finished the set before the boys Jay Hughes Guitar, Jag Bahra guitar, Lea Cross Bass and Wayne Turner Drums returned to play their first ever cover live. What a great track they chose in the form of “Fortunate Son” the Clearance Clearwater Revival classic. It really suited this band who pulled off a wonderful version.

A cracker of a show at Scruffys. For those of you would didn’t make it, you missed a glorious night.