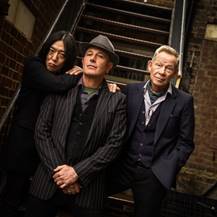 The date follows the 2021 release of The Professionals’ acclaimed album ‘SNAFU’, which Vive Le Rock magazine hailed as “quite simply album of the year”.

Joining The Professionals on the bill for a DJ set will be Creation Records founder Alan McGee, who recently became the band’s manager, with additional support from Manchester’s acclaimed rock ‘n’ roll band Alias Kid (www.aliaskid.co.uk) and London-based post-punk trio The Molotovs (www.instagram.com/themolotovs).

All ticket holders will also receive a numbered limited edition Christmas card signed by the band.

The foundations for The Professionals to emerge were laid while Cook and guitarist Steve Jones busied themselves completing the film The Great Rock ‘N’ Roll Swindle, following the demise of the Sex Pistols in 1978.

With the Cook ‘n’ Jones composition ‘Silly Thing’ reaching number 6 on the UK single’s charts in April 1979, the pair proved they could deliver in their own right and spent the rest of the year working on what would become The Professionals’ debut single ‘Just Another Dream’ and its follow-up ‘1-2-3’, released in July and October 1980, respectively.

With bassist Paul Myers and additional guitarist Ray McVeigh, they recorded BBC radio sessions for both John Peel and Mike Read, followed by the release of anthemic single ‘Join The Professionals’, before the album ‘I Didn’t See It Coming’ hit the shops in November 1981.

However, a catalogue of bad luck, health issues and missed opportunities took its toll. At the end of their 1982 US tour Paul Cook, Ray McVeigh, and Paul Myers returned to the UK without Steve Jones, who remained in the States. It would be the last we’d hear from The Professionals for 33 years.

In 2015 it was announced that The Professionals were back. Paul Cook, Paul Myers and Ray McVeigh were joined by Tom Spencer who took over where Steve Jones left off as front man/guitarist. The reformation coincided with the release by Universal of a 3CD compilation set ‘The Complete Professionals’.

A sold-out 100 Club gig reinvigorated the band and in 2017 a new album ‘What In The World’ was released. With Ray departing, a staggering array of guest guitarists featured: Billy Duffy, Mick Jones, Phil Collen, Duff McKagan, Marco Pirroni, and yes, Steve Jones. It received wide critical acclaim from the likes of Classic Rock, Mojo and Vive Le Rock. The launch show at The Garage, London, was released on CD as ‘Live In London’.

A series of three EPs were released in 2020 under the banner ‘1-2-3’, with lead tracks ‘Kingdom Come’, ‘Curl Up and Cry’, and ‘Twenty Twenty Vision’. During the Covid pandemic Chris left the band. Meantime, Paul and Tom knuckled down to write and record ‘SNAFU’.

With a vast catalogue of tunes from which to draw, The Professionals’ exhilarating live performances are a celebration of both their past and present.

Tickets for The Professionals at 229 in Great Portland Street, London, are on sale now, available from: