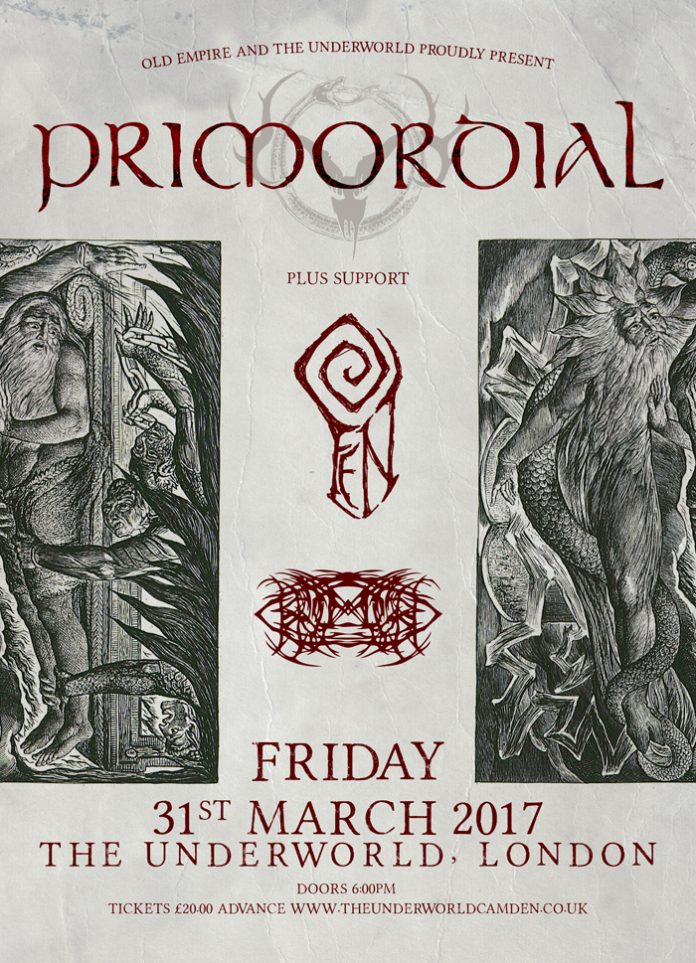 One off show announced

PRIMORDIAL have announced a one-off headline show at The Underworld, London on Friday March 31, 2017.

Nemtheanga has this to say:“UK! We’re coming back again for another weekend on your delightful soil. Along with Fen & Crom Dubh we will play a slightly more intimate than usual London show in the hallowed Underworld venue which should guarantee a special atmosphere and we will follow that up with a return to Glasgow to take part in the Lords Of The Land festival alongside, amongst others, our good friends in Marduk and the mighty Autopsy. We’re looking forward to seeing you all and playing tracks from our latest ‘Where Greater Men Have Fallen’ album alongside plenty from the back catalogue too. Vae Victis!”

Tickets are on sale now here www.theunderworldcamden.com and through the usual channels

The next day, April 1, 2017 they head to Glasgow Scotland to join Autopsy, Marduk, Venom Inc, Acid Reign, Memoriam and more at Lords Of The Land 2017

Primordial released their latest album ‘Where Greater Men Have Fallen‘ in November of 2014. The eight track, fifty-eight minute magnum opus, was recorded at Grouse Lodge in Dublin with Jaime Gomez (Cathedral, Angel Witch, Grave Miasma) and delivers some of the band’s deepest, most methodically arranged, thematically profound and plainly gripping compositions of their winding catalog of sonic enormity.