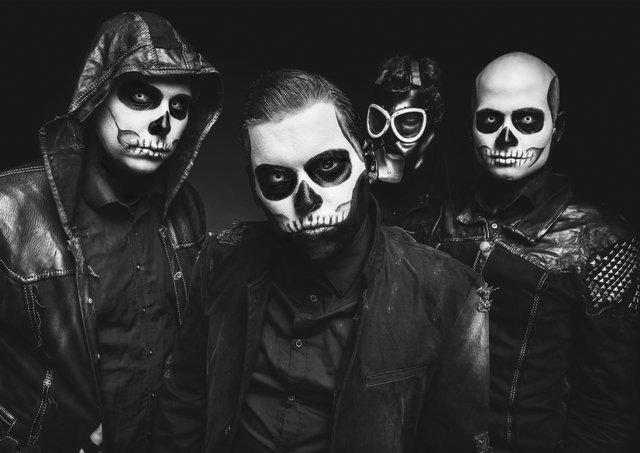 Debut album and tour dates on the way

JOHNNY DEATHSHADOW will release their debut album ‘Bleed With Me’ on November 25, 2016 on Make It Big Records.

After putting out the EP “Blood and Bones” of more traditional Death Rock in 2013 the band has now found their own sound somewhere between Rob Zombie, Ministry, Pain and Combichrist: Modern and heavy Industrial Gothic Metal.

JOHNNY DEATHSHADOW are ready to embark on their second UK tour to support their debut album “Bleed With Me”. The album was produced in close collaboration with Alex Henke (Dark Age, Wirtz)  and musicians like JP Genkel (Lacrimosa, Black Moon Secret). Marcel Zürcher (Die Krupps) and Kai „Keile“ Stuffel (Wirtz) have helped to make the songs and the sound perfect. Mastering has been done by Svante Forsbäck (Lindemann, Amorphis, Apocalyptica, Volbeat). 2016

During the six years since founding the band in 2010, the Hamburg based group has shared the stage with established acts like Rotting Christ, Lord of the Lost, Unzucht, Coppelius or Stahlmann. In 2014 JOHNNY DEATHSHADOW toured in the Czech Republic and Poland and 2015 the Death Cult was exported to the UK for the first time.

On October the 21st the long-awaited debut album BLEED WITH ME will finally be released. With a fresh mix of Industrial Rock, Metal and Gothic this record could set a new standard for the scene. The already released club hit „Kill the Lights“ and the hard-hitting „Black Clouds, Dark Hearts“ show what this young band do while still maintaining their own style.

JOHNNY DEATHSHADOW already supported Pyogenesis on their „A Century in the Curse of Time“ tour and have played shows with german scene mainstays like Stahlmann or Vogelfrey. Around the release the band will tour in Germany and also return to the UK. The Death Cult lives, more than ever!