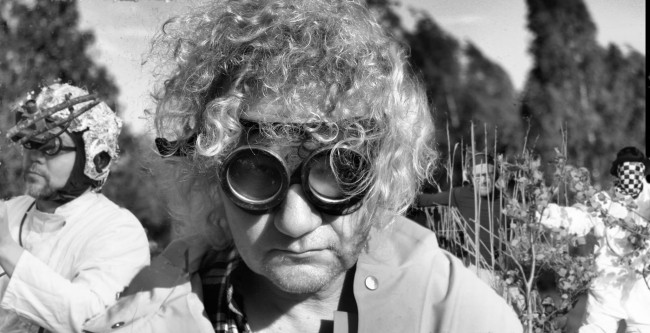 The Physicists is known from their relentlessly innovative anything can happen live acts. Says main man MC Omega Zero: “We try to keep routines as far away from us as we can. That is because we are highly neurotic and are trying to escape some horrible thought all the time. We also consume a lot of alcohol during, before and after the shows and usually cannot remember what we did last time. Typically before a gig we walk to a local hardware store or a fleamarket and buy whatever comes to mind to build the nights show.

The group has been around from 2006, that is almost 10 years now. They have toured all over Finland, released 1 single, one EP and one album ”Observation”. The group has had 4 guitarists and 3 drummers over the period. The new album ” My love is dead ” took around 4 years to complete

”I see us as an artist community with people coming and going all the time. Although we are battling all over while doing the projects there are no hard feelings after somebody quits. There is a kind of natural cycling process going around. One has to remember that the Physicists is a demanding project and there is not much money flying around or coming in. We are very serious about the music and everything, but we for whatever reason simply must do everything the hard way around. That takes time. My love is dead contains 10 songs and a few remixes. There is a certain theme and a very strict logic all over the piece but musicwise it contains so many different, even contradicting elements that it really took a while. There were 4 mixers, 2 mastering engineers and 3 producers in the project. It was a mess. On the final day of production our main mixer Jan from X-M-P told me that if he´d have to make one more change to the mixes he would flat out fucking die. That´s why the record is absolute shite. No, I think we did pretty good.”