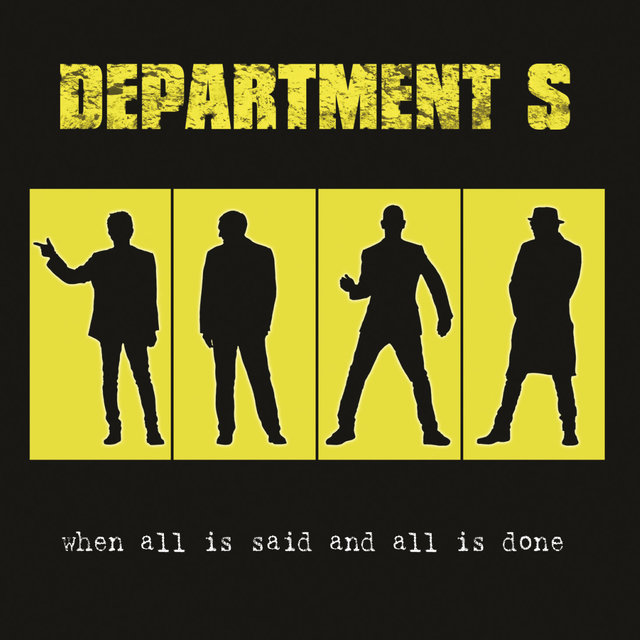 New deal and new album in the works

DEPARTMENT S have signed to Westworld Recordings and will release their first album since 2011, ‘When All Is Said and All Is Done’. This 10 track full length album is released on May 27, 2016 on both digital and  CD formats, with a subsequent limited edition vinyl release planned for later in the year.

Department S will be touring extensively through 2016 to promote the album.

Recorded in London through 2015, the album has been produced and mixed by Pete Jones (former PiL bassist).

Department S are back.  And playing gigs for what is now the 10th year since they reformed. Current line-up features the legendary Mike Herbage, Eddie Roxy and ex-PiL, Cowboys International and Brian Brain bassman Pete Jones, along with new guitarist Phil Thompson (who also plays for Bug) and Alex Lutes on drums (whose past credits includeFMB and Night Nurse).

The band played their first gig in London, September 1980. Their first single, “Is Vic There?”, was released in December 1980.  It was produced by former Mott The Hoople members Buffin and Overend Watts, and reached number 23 in the UK charts, aided by 3 appearances on Top Of The Pops.

The group recorded a session for DJ John Peel on 3 Dec.1980. The follow-up single, “Going Left Right”, was released on Stiff Records and hovered for a while outside the top 30 whilst the third single, “I Want”, was a hit in many European countries,

Their album “Sub-Stance” subsequently released on LTM in 2003.

In February 2007, Department S recorded their first new single for twenty-six years, a cover version of Alvin Stardust’s 1973 hit “My Coo-Ca-Choo”. Since then there have been a number of releases, including the well received LP “Mr Nutley’s Strange Delusionarium” which featured guitarist Sam Burnett (ex-Back To Zero). Their 2010 single “Wonderful Day” featured on a TV commercial and featured guest appearances from Marco Pirroni and Glen Matlock.

Department S have built up a reputation as being a must-see live band and have subsequently played festival dates across Europe, including Glastonbury, Benicassim, Rebellion, Rewind, Great British Alternative Music Festival, Undercover and Sinner’s Day.