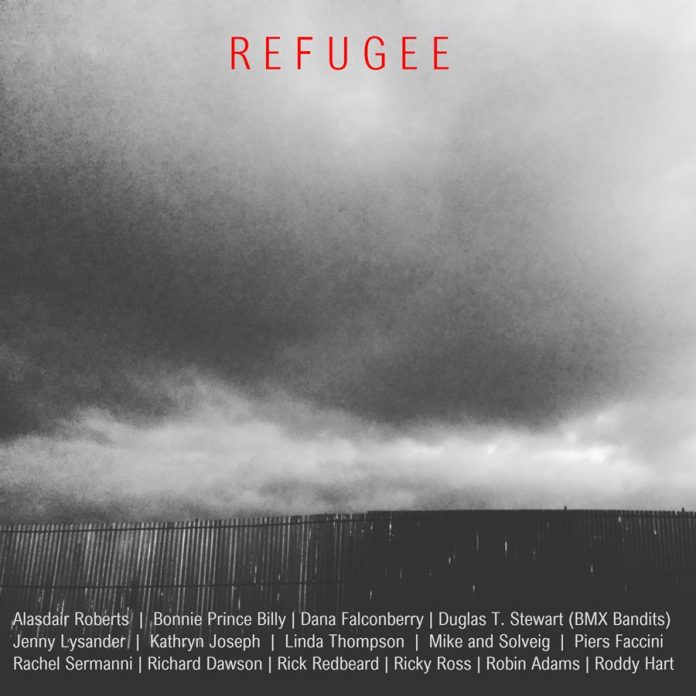 New collection looks at the plight of refugees

‘Refugee’ is a highly significant collaborative recording project which reflects, through song, the issue of the refugee crisis in its many forms, from Syria and beyond.

The concept came about from singer-songwriter Robin Adams who took on the challenging role of curator for this beautiful collection of music. Featuring the likes of folk familiars Linda Thompson, Bonnie Prince Billy, Rachel Sermanni, BMX Bandits, Richard Dawson and many more, each song stands with individual character, yet the delicate ties of each subject make this a well-formed and consistent body of work. As Adams says about the collection –“What amazes me is that every song works. Every song seems to fit the sentiment of the record effortlessly even though the songs vary largely in subject and spirit.”

A poignant and moving assembly of songs, the album contains perspectives from different visions in the crisis. Focusing in on the issues addressed, the subject matter leans toward one particular area of the refugee’s journey – the daring move to cross the oceans. From the warm home recording of ‘Scarce of Fishing’ by Alasdair Roberts, to Richard Dawson’s chanting ‘To The Sea’, and to Adam’s own beautiful contribution ‘The Devil’s War and God’s Blue Sea’ (the single which spawned the initial concept), the topic keeps surfacing as a reminder of the overall cause – to raise money for MOAS, whose rescue missions operate in the Aegean, Andaman and Mediterranean Sea.

“The first and foremost priority should be getting these people safely to dry ground and so MOAS was always the obvious choice. Their work has already saved around 12,000 lives in the first two years. All of the money made from this album will go straight to MOAS to aid them in saving more lives… Although the motivation for the record was primarily sparked by the Syrian crisis, there are so many other Countries enduring humanitarian crises, so the record is really dedicated to all refugees.”

Here’s some further details on the project from the curator of the project and contributor, Robin Adams –

“Around the beginning of last year I found myself increasingly disturbed by a growing number of reports from many reputable independent media outlets, not only describing the horror of the Syrian crisis itself but also a shocking lack of coverage in the mainstream media. What little coverage there was I found to be deeply troubling given the insensitive nature of the reporting.

All of this moved me to write a song that directly addressed the problem. The obvious thing to do was to release it digitally via Bandcamp as a charity single to raise money for MOAS At the time [of the single], the severity of the crisis hadn’t quite resonated with the general public, because it simply wasn’t being reported frequently or clearly enough in the mainstream media. Months later there was a shift in awareness after [the media] published heartbreaking photographs in September 2015 of Syrian toddler Aylan Kurdi washed ashore on a Turkish beach. That moment seemed to turn public perception on the crisis around very quickly.

It occurred to me that organising a charity album might be the best way I could help. I got in touch with anyone I could think of whose music I admired and asked if they’d be interested in contributing. I just asked if they’d like to write a song or contribute something new which they felt might be fitting. The response was wonderful and it just grew from there.”

Learn more about MOAS at www.moas.eu