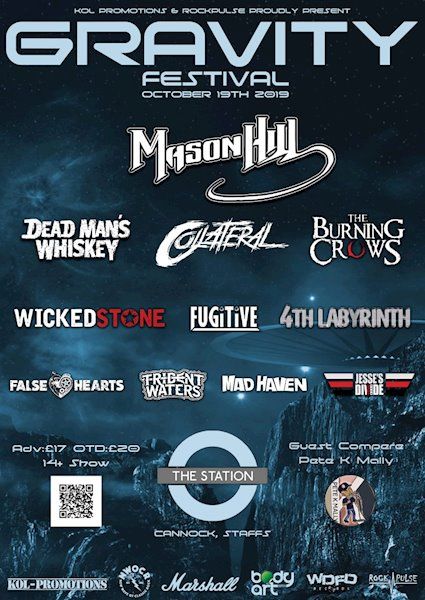 The inaugural GRAVITY Festival UK, being held at The Station in Cannock on October 19th 2019, is already heading towards being a sold-out event – much to the delight of the organisers, venues and bands that will make the celebration of melodic hard rock such a special day.

Gravity Festival UK 2019 is being held at The Station venue in Cannock, Staffordshire – which has seen a meteoric rise in popularity with both bands and punters alike due to its central location, easy parking within 2 minute walk, and facilities for the disabled – in addition to great sound and competitively priced bar. The special guest compere for the day will the effervescent Pete K Mally so expect some of his trademark humour to enliven proceedings!

It will be Mason Hill’s only remaining show in England in 2019 – before they release their brand-new album early 2020. Scott Taylor, front-man of Mason Hill commented, “This year we’ve been focusing on our new album which means we’ve not been booking many shows – so we’re absolutely delighted to be headlining at the first Gravity Festival in October, we’re really looking forward to showcasing new material alongside some old favourites!”

Nico Rogers, vocalist of Dead Man’s Whiskey had this to say, “We’re delighted to be playing Gravity Festival this year. Whilst being a London band we’ve always said the Midlands feels like a second home, so we can’t wait to return on 19th October and give Cannock a night to remember. We’re also super excited to be joining such a strong bill, with Mason Hill and Collateral to name a few, so we want to give a massive shout out to KOL Promotions for putting this together. Expect a balls-to-the-wall rock’n’roll show with brand new material and a few surprises in between. See you soon!”