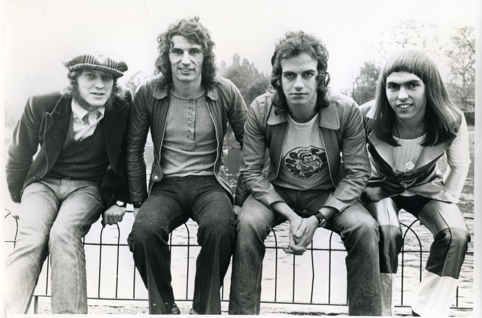 This is the first time there has been a promotional video for the ultimate festive anthem.

‘The video is very unusual and comical. It does sum up the band’s characters HO HO HO!’ exclaims Noddy Holder.
Originally released in 1973 Merry Xmas Everybody was the band’s sixth number-one single in the UK and sold over a million copies upon its first release.

A Christmas standard Merry Xmas Everybody has spent an incredible 105 weeks in the Official UK Singles Chart and entered the charts for an amazing 26th time this week. In 2009, PRS for Music announced that up to forty-two percent of the world’s population could potentially have listened to the song!

The first release in this beautifully presented re-issues collection ‘Slayed? debuted at #7 in the Official Vinyl Charts.
Slade’s first live album ‘Slade Alive!‘, originally released on 24th March 1972, entered the UK album chart at #2 and remained in it for 58 weeks. Featuring the anthems ‘Get Down and Get With It’ and ‘Know Who You Are’, today ‘Slade Alive!‘ is considered one of the greatest live albums of all time. “Sounds better, the louder you play it” – Los Angeles Times.

‘Slayed?‘ features ten songs including Number One single, ‘Mama Weer All Crazee Now’  and ‘Gudbuy T’Jane‘ which reached Number two in the charts. While ‘Old New Borrowed And Blue’, features the singles ‘My Friend Stan‘ and ‘Everyday‘ and  The Times to retrospectively state: “This is joyous, unshackled and unpretentious stuff that reminds you how they rattled off six No.1’s.” Slade’s first soundtrack album ‘Slade In Flame’, includes the singles ‘Far Far Away’ and ‘How does it Feel’ and their seminal film was hailed as ‘the Citizen Kane of British pop movies” by Mark Kermode, BBC.

Slade are without doubt one of the most exciting bands to come out of Great Britain and were unstoppable throughout the Seventies becoming one of the biggest bands; releasing six smash hits albums, including three UK Number Ones, a run of 17 consecutive Top 20 singles and their hits provided a soundtrack to the Glam Generation.