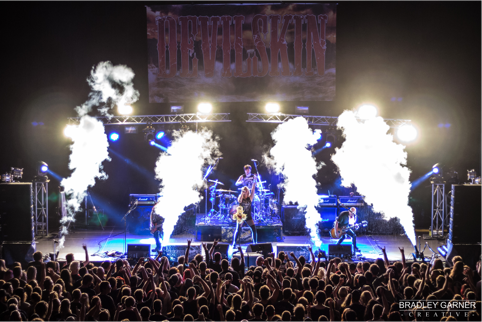 DEVILSKIN following a hugely successful UK tour in March, are proud to announce a pair of intimate shows to coincide with their performance at Download 2017.
DEVILSKIN play Ireland with Airbourne before they return to the UK to play the Download Festival on Sunday June 11th at  4pm on the Dogtooth stage, followed by two headline shows in Bridgewater and Bournemouth on June 14th and 15th .
“We are totally excited to hit Ireland for the first time and especially so to share the stage with the mighty Airbourne, those shows will be off the hook! Then we get to live the dream of playing Download festival alongside so many of our heroes. We are so ready! All guns WILL be blazing and us Devils will be taking no prisoners! Look out Download!!”
Devilskin will be playing songs for their new critically acclaimed new studio album Be Like The River,  which features the singles Voices and Pray
History recently repeated itself for Devilskin as their new album Be Like The River entered their domestic album chart at #1 on week of release. Just 18 months ago their debut album We Rise spent 3 weeks in the pole position. This is unprecedented in rock music in New Zealand and is a testament to the excellence of Devilskin’s brilliant second studio album Be Like The River.
Be Like The River was recorded at Modern World Studios, Tetbury in the United Kingdom after Devilskin’s European Tour in 2016.  After the success of We Rise the band maintained their strong working relationships, continuing the very successful and creative association with Producer Clint Murphy. Murphy produced and mixed the album, working alongside Ryan Smith from Sterling Sound New York who mastered both albums.
Devilskin have established themselves as a household name in their native New Zealand. Formed in Hamilton in 2010 this four piece rock band are bonded by blood. Paul (bass) and Nic (drums) are father and son, Jennie (vocals) is Nics’ Aunt and Paul’s sister in law, Nail (guitar) is Paul’s evil twin.
Devilskin have already earned a formidable reputation by earnestly demonstrating commitment to unpretentious musical values: writing songs that have depth and passion, and a relentless touring schedule. Their tactical instrumental attack is balanced by the seductive Jennie Skulander and her incredible voice that sweeps from whisper to roar, rips with power, drips with melody and captivates with sincerity.
Musically twisted and possessed, catch the fearsome and irresistible Devilskin and be prepared to have your soul shredded.
DEVILSKIN  UK & Ire June tour dates
Tue  6th Dublin  The Academy  w/ Airbourne
Wed 7thBelfast Think Tank w/ Airbourne
Sun 11th Dogtooth Stage DOWNLOAD 2017
Wed 14th Bridgewater  The Cobblestones
Thur 15th Bournemouth  The Anvil
Ticket links
Dublin:
http://www.ticketmaster.ie/airbourne-dub…/…/18005168C0B0849E
Belfast:
http://www.ticketmaster.ie/airbourne-be…/…/380051697B8D0871…
Download Festival:
http://downloadfestival.co.uk/tickets
Bridgwater:
http://www.seetickets.com/…/devils…/the-cobblestones/1102623
Bournemouth:
http://www.seetickets.com/event/devilskin/the-anvil/1102624