TRIBUTE TO THE KING 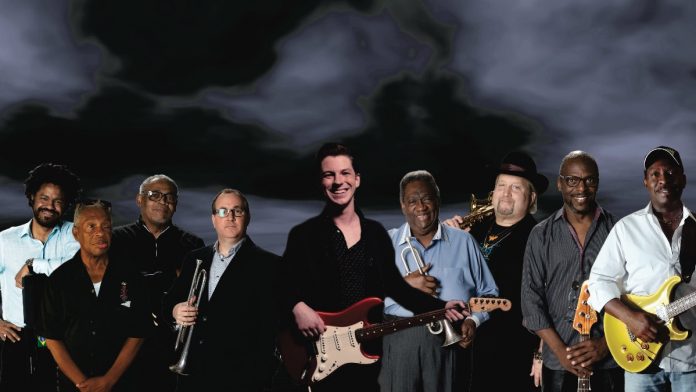 The B.B. King Blues Band are thrilled to announce that their new album, The Soul of the King, debuted today at #1 in the Billboard Blues Charts. The band also announce their summer tour featuring B.B. Kings daughter, Claudette King (vocals) and Michael Lee from The Voice (guitar & vocals.) The Soul of the King tour commences on May 23rd and runs into the fall (scroll down for dates.)

Four years since the passing of the great B.B. King, his towering influence over the blues world, and beyond, remains undimmed. King’s music will never be forgotten, and this year, the iconic bluesman’s presence is felt stronger than ever, as his spirit imbues a star-studded new album, The Soul Of The King.

The new album finds The B.B. King Blues Band along side featured performers, Taj Mahal, Joe Louis Walker, Kenny Wayne Shepherd, Kenny Neal & Michael Lee. The members of the band are all lifers, with over 100 years of cumulative experience. Not only did they support King, but they would start each show by performing onstage before BB came out. After King passed, the band was naturally at a loss until they started playing some festivals and eventually got their footing back. The current lineup includes: Michael Lee (Lead Vocals. Lead Guitar), James “Boogaloo” Bolden (Trumpet). Russell Jackson (Bass and Vocals), Herman Jackson (Drums) , Eric Demmer (Saxophone), Wilbert Crosby (Guitar and Vocals), Lamar Boulet (Trumpet), Darrell Lavigne (Keyboards), and Walter King (Saxophone.)

Per manager Terry Harvey, “This record is a representation of B.B.’s musical styles and influences, to those who never got to hear or see him live.” The King would surely approve of Joe Louis Walker’s masterful solo on “Regal Blues”, Kenny Wayne Shepherd’s soulful hat-tip on “Irene Irene”, Kenny Neal’s vocals and solo on “Sweet Little Angel” and Taj Mahal and Mary Griffin’s interpretation of “Payin’ the Cost To Be The Boss.” The collection is rounded out by Michael Lee’s unforgettable vocals and searing guitar work on “The Thrill is Gone”, trumpet legend James ‘Boogaloo’ Bolden’s own “Hey There Pretty Woman”, and “Low Down” penned and sung by Russell Jackson. It’s easy to say that the new material holds its own alongside their late leader’s catalogue.

James “Boogaloo” Bolden Trumpet/Lead Vocals/Backing Vocals Born in Houston, TX, James Bolden began his musical training under the guidance of Edmund C. Broussard. Bolden later seized the opportunity to study classical trumpet under Houston Symphony Trumpeter Richard Schafer. James went on to play with local union bands that performed with a wide array of artists such as Stevie Wonder, Isaac Hayes, Temptations, Supremes, Spinners, and James Brown. Bolden eventually was given the opportunity to join the Duke Ellington Orchestra where he thrived for years. Bolden later joined the band of B.B. King and became bandleader during a stint of over 35 years. James Bolden now continues his association with B.B. King by joining B.B. King’s Band as bandleader.

Russell Jackson Bass Guitar/Lead Vocals/Backing Vocals Starting his 41-year career in 1974, Russell Jackson moved to Chicago in 1976 and gained his blues stripes working with Otis Clay, Buddy Guy, Bobby Rush, and others like Charlie Musselwhite and WIllie Nelson. For 8 years, Russell toured exclusively with B.B. King as his bass guitarist for over 17 years. Jackson was the first artist to put slap bass on a live blues recording, (Live at Old Miss 1979). During the 1990’s, he recorded with Kenny “Blues Boss” Wayne on his Juno Award winning CD. In 1992, the Russell Jackson Band debuted and Jackson released three CD’s of his own material. Present day, Russell is the Music Director for the New Generations of the Blues European Tours, formerly known as The Chicago Blues Festival. Jackson was welcomed into the B.B. King’s Blues Band because of his extraordinary talent.

Eric Demmer Saxophone “Hear what you feel, play what you hear.” At the age of 10, Eric received his first saxophone, so began the journey of a natural-born musician playing anywhere at any time with anyone. One night, Eric was invited to perform onstage with the legendary Clarence “Gatemouth” Brown at a Houston club known as “Billy Blues.” On that night, Eric joined Gate’s band and traveled all over the world for the next 12 years utnil Gate’s death in 2005. The journey with Gate included performing as the opening act for Eric Clapton’s “From the Cradle Tour.” This gave Eric the opportunity to perform with many well-known and respected musicians, ie. Carlos Santana, George Duke, Joe Sample, David Sanborn, and B.B. King and BB Kings Blues Band. Buddy Guy, the Allman Brothers, and Dr. John were among many others.

Wilbert Crosby – Guitar and Vocals Born and currently based in Chicago, Crosby has had the opportunity to perform and record with a diverse group of artists such as Pops Staples, Mavis Staples, Aretha Franklin, Charlélie Couture, and Carey Bell. A love for Blues, Gospel, Jazz and Soul music has been a part of his life since childhood. His father was a local tenor saxophone player in Chicago in the 1950’s and his godfather was Howlin’ Wolf’s blues drummer S.P. Leary, Crosby was always surrounded by legendary artists. By the time he was 10 years old, he was playing guitar with his father’s band during their rehersals. In 1983, Wilbert began playing with Pops Staples and went on his first international tour. Already interested in composition, he had the opportunity to compose and arrange for other artists including Carey Bell. Out of their collaborations and creative efforts, the album, “Good Luck Man” (1997) won the W.C. Handy Award. Accolades have adorned Crosby’s career. He was awarded the Albert King award in 1996 and has performed at the White House during both the Clinton and Bush administrations. He performed the Grammy awarded song, “Have A Little Faith” with Mavis Staples at the 2005 Grammy Awards. Additionally, he played with Pops Staples at the 1995 Grammy Awards in an all-star jam with Bonnie Raitt, Phil Upchurch, WahWah Watson, Isaac Hayes & Maria Muldaur.

Lamar Boulet – Trumpet raised in Lafayette, LA, but got his start in the music business in New Orleans. It was there he was able to study and work with some legends such as Ellis Marsalis, his first teacher in the study of jazz. As an undergraduate, he studied with the incomparable Vince DiMartino at the University of Kentucky before receiving his masters degree at the University of Miami. Lamar later moved to Orlando and worked at Disney as a composer/arranger, musician. Carnival Cruise Lines hired him as Musical Director and he spent 4 years in charge of musicians and talent. He also toured with Grammy Award winning Latin artist, Tito Nieves. Lamar is honored to be a new member of B.B. King’s Blues Band.

Darrell Lavigne – Keyboards/Vocals Lavigne has been performing on stages around the world, most notably New Orleans Jazz & Heritage Festival, Rotterdam JVC Jazz Festival Netherlands, and the Berlin Jazz Festival. He began his musical life at age 10, first on guitar then trumpet, but piano became his instrument of choice. “I wanted to explore harmony and the colors of music. Piano represented that for me.” Darrell’s influences came for the usual jazz sources as Monk, Bud Powell, Ahmad Jamal, Hancock, and Corea. Charlie Parker, Coltrane, and Miles Davis. Early musical exposure in addition to the mentoring by Ellis Marsalis and Edward “Kidd” Jordan helped Lavigne become one of the most sought-after pianists around. Darrell has gone on to record two albums with then Columbia Jazz Artist, Kent Jordan, write for one (Night Aire) and produce another (Out of This World). Over the years, Darrell has performed with artists BB King, BB King’s Blues Band, Kirk Whalum, Marion Meadows, George Duke, Hubert/Ronnie Laws, and Everette Harp to name a few. He continues to produce and write for a number of artists. Discography: Blue Orleans (Fertile Crescent, 2000); Kidd Jordan/IAQ-Kidd Stuff (Danjor); Michael Ward-After The Kiss (Sweet Music Records, 2006).

The Soul Of The King out now by Ruf Records.