3 Doors Down have revealed the official video for their latest single “In The Dark,” starring none other than RJ Mitte [Emmy Award®-winning Breaking Bad, Switched At Birth] and directed by the duo of Magnus Jonsson and Martin Landgreve of Gaucho Film [Azealia Banks].

“In The Dark” which is already Top 5 at Active Rock Radio, is the first single from the GRAMMYAward®-nominated multiplatinum Mississippi rock band’s sixth full-length offering, Us And The Night[Spinefarm Records], out in stores and digitally March 11. Pre-order it here.

Huge fans of the music, the star and filmmakers both jumped at the opportunity to work with the band. Now, the video showcases Mitte like you’ve never seen him before. He puts on his headphones, cranks some 3 Doors Down and what ensues is a bit unexpected – with a sexy twist.

On working with the band on the video and the video’s star RJ Mitte, directors Martin Landgreve &Magnus Jonsson commented: “To make music videos were The Gaucho boys’ childhood dream, so to make a video for childhood idols 3 Doors Down is incredible. When Republic Records first reached out to us with this project, we called RJ Mitte right away! Explained the project, our idea for the song and he was ecstatic! Turns out RJ is a big 3 Doors Down fan himself, and told us a few memorable stories from his life that were defined by 3 Doors Down. RJ is a born actor, and probably the best we’ve worked with. He brings a lot to the table and he’s just as cool and rock ‘n’ roll as 3 Doors Down themselves-couldn’t have been a better choice for the role! Overall a kick ass song, with a fun and twisted video that leaves you wondering. Making this video was a great experience and everyone in and around the team was amazing!”

Echoing the directors’ love of the band, the video’s star RJ Mitte noted: “I had a great time filming this video, and it was great day of shooting with people I consider my friends. Doing music videos are like mini movie sets and you have to connect with the music as well as the director and the team behind the scenes in order to tell the story the way the band envisioned.

I think we have captured it with this video. I’ve always been a fan of the band so this was a great project to work on. I hope everyone enjoys the video, I can’t wait to see it all play out!”

“We came out of the gate with a song that’s really different for us,” says singer Brad Arnold. “We needed to match that with the video, and Magnus, Martin, and RJ brought that vision to life better than we ever could’ve imagined.”

Following 2011’s Time of My Life, which landed at #3 on the Billboard Top 200 and The Greatest Hits in 2012, the band continued its non-stop touring performing for audiences across the globe. Gearing up for Us And The Night the group recorded the album at Rivergate Studios in Nashville, TN with producer Matt Wallace [Maroon 5, Train, Faith No More] over the course of 2015. It nods to the spirit of their breakout debut with seasoned songwriting and the biggest and boldest songs of their 16-year career to date. 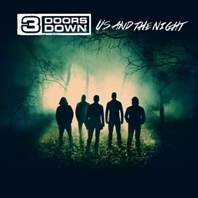 Us And The Night Tracklisting