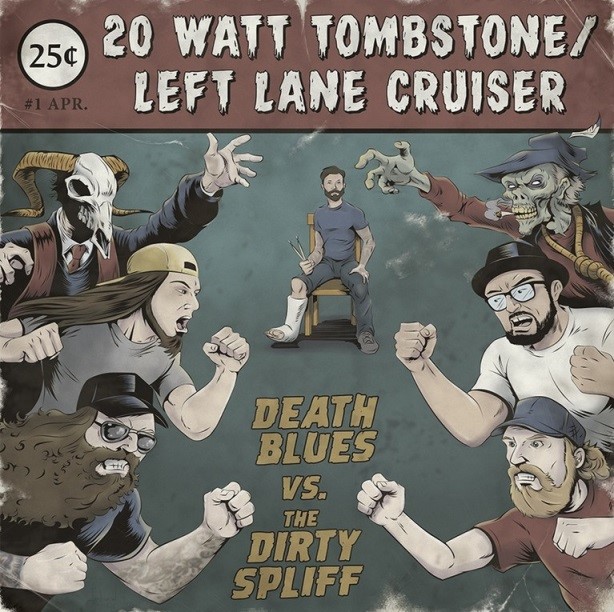 Maximum Volume followers will be aware how much we loved the Left Lane Cruiser ‘Dirty Spliff Blues’ album last year and our recent review of the 20 Watt Tombstone ‘Wisco Disco’ release was similarly glowing with praise. Therefore what could be better than to see that the two bands have released a joint album, featuring three tracks from each band? It is therefore great to be able to tell you that the music delivers in (gut) buckets and then some!

Left Lane Cruiser open the album with ‘Laid To The Bone’ which jumps out of the speakers with a really dirty sounding guitar riff before the band kick in. ‘Slow Grind’ follows and it is exactly that, featuring plenty of blues slide guitar throughout. Their third and final track is ‘Special Delivery’, which seems an apt name as it is the best of the three. A great band performance held together by the riffing guitar and those gut-bucket vocals.

It is then the turn of 20 Watt Tombstone to take the stage and their opening track is ‘Your Man’s A Jerk’ and this carries on the great work of the ‘Wisco Disco’ release. It is a bluesy sounding song with just the guitar, vocals and drums of the two piece combining to produce a sound that is reminiscent of similar bands from early Black Keys to Royal Blood with lashings of Jon Spencer Blues Explosion thrown in for good measure. ‘Lair Of The Swamp Witch’ is a faster number that really motors along, driven by a ferocious backbeat and slide guitar. Like Left Lane Cruiser, 20 Watt Tombstone have also left their best track to last, with their final song ‘Whiskey In My Brain’.  It is a little slower number than the preceding one with the kind of fuzzy guitar that Fu Manchu have built their career on.

So there you have it, a split album that delivers for fans of both groups and will be a great introduction for anyone looking for some dirty sounding blues to test the quality of their speakers – recommended.