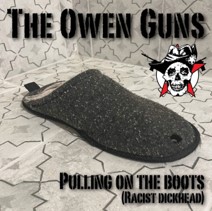 Pulling On The Boots is the latest single from The Owen Guns. A hardcore punk band from the South Coast of N.S.W. Australia.

Since 2020 they’ve released two EPs – Violating Community Standards, and EP 2 Electric Boogaloo. Their blend of politics and tongue-in-cheek social commentary is their recurring contribution and has even seen them suspended from various platforms (true story, ask them about it).

A professionalism and work ethic that speaks for itself with 2 EPs and now Dawn of the Braindead – their ﬁrst full length album all within 2 years.

Always well received on Punk and Hardcore radio programs and their live shows are the stuﬀ of legend. Pulling On The Boots is not just a taster for the album but a charity single, with 100% of the Bandcamp earnings going to The Sunset Soup Kitchen.

The song itself is a reworking of a now infamous skinhead anthem (found on The Romper Stomper soundtrack), twisted with new lyrics to mock the racists in that movement.

How Punk? THIS PUNK! They’ve managed to turn a genre on itself. Stand by for future singles but for now, pull on your boots, ﬁght racism and help raise money for The Sunset Soup Kitchen.