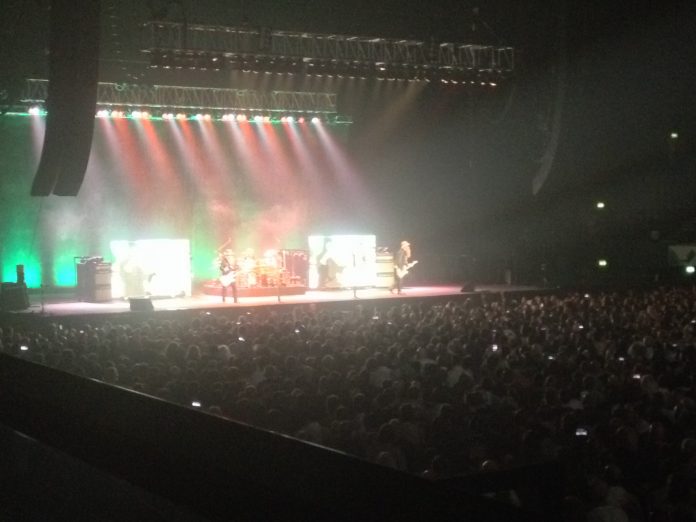 One band wants all your lovin’. One doesn’t care unless it’s dirty. The best double bill of the summer.

With the greatest of respect to the headline Little Ol’ Band From Texas, there’s as many Thunder shirts outside as ZZ Top ones. There’s a good reason for that – Thunder are an arena band in their own right.

Their presence on this bill has ensured the gig takes place in a bigger venue than when the Top were last in town (that gig took place at Hammersmith Apollo) and their skill means Thunder can handle this 50 minute opening slot with their eyes shut.

But there’s a problem. Just before 7.30pm “Thunderstruck” starts up and the band walk on. As often when they support they are starting with “Dirty Love” and are giving it what we might term “the full monty” which means singer Danny Bowes screaming “oh baby I…..” At the top of his lungs for about five minutes to whip things up. He’s done this three or four times when he walks up to the mic and says to about 10,000 of his closest friends: “yeah, I’m bored now to be honest….”

“…..Love” finally underway, the band set about proving their back catalogue matches anyone’s and casually toss out “River Of Pain” early just because they can.

Thunder made a glorious return – after yet another retirement was ended – this spring with the superb “Wonder Days” record and a smattering of its treasures are given their head here. “Black Water” is excellent, although darker than their usual output, but the title track and a real good fun “The Thing I Want” show the mojo is very much back.

As is – thankfully – Ben Matthews. Now over his health scare, the band are returned to a full compliment and it shows on the “Backstreet Symphony” and the enormous – and still gorgeous after 26 years – power ballad “Love Walked In.”

The cowbell shows up, which means “I Love You More Than Rock n Roll” is about to close things, confirming what has long been obvious. Thunder are the finest hard rock band on the planet. End of. Let’s ditch the daft retirements and hiatuses, shall we chaps?

From the best Hard Rockers to the best – and most successful – Boogie Band in the world.

All evening Planet Rock Radio supplied the music to be played on the tannoy. Before Thunder came on there was an airing for Bryan Adams’ “Kids Wanna Rock.” The line: “this computerised crap ain’t getting me off, everywhere I go kids wanna rock” seems apposite here.

Granted there aren’t many kids. But three blokes in a band for over 40 years just making rock n roll, seems the definition of real doesn’t it? They flirted with MTV and had some hit singles – all played here – but largely, ZZ Top just play Bluesy Boogie better than anyone else does, ever has, or probably will do again.

That said, the set has a, let’s call it, well worn look about it. It’s the same one more or less, that they’ve played the last twice they’ve been here, give or take the brilliant “Gotsta Get Paid” and “Chanteuse” from the “La Futura” which came out in 2012 and still classes as their “new” album.

Which means “Got Me Under Pressure” starts us off and there’s a trawl through some Greatest Hits – the magnificent “Jesus Just Left Chicago” and “I’m Bad I’m Nationwide” are highlights here – there’s a couple of covers, Jimmi’s “Foxy Lady” is done with real feeling, and things end with the pair of “Eliminator” songs that made them chart stars. And you know what? “Sharp Dressed Man” and “Legs” are still incredible songs.

There is a feeling, though, that you’ve seen it all before. Literally. The same stage clothes, the same videos on the big screen, even the same stage banter. ZZ Top are a magnificent band playing their songs brilliantly – and Gibbons is a much better guitarist than he gets credit for – but at this point in their careers they don’t do spontaneity.

Or so you’d think.

Then they are back – usual sparkly jackets in tow – but with a special guest. Birthday boy Jeff Beck has joined them for a knockout “Rough Boy,” then the four men jam with abandon and fun, before “Tush” brings things to a close. You suspect the band enjoyed the encore as much as the crowd and just for 15 minutes they were back to their roots and not playing the arena rock game.

ZZ Top are a lesson to everybody. As Billy Gibbons points out with glee, they’ve been coming here for about four decades, same three guys, same three chords. Not that anybody’s bothered. As he’s fond of asking: “Are we having a good time now?” When ZZ Top are in town it’s hard not to.

Previous article
Featured Band: Intensive Square
Next article
More Great Vinyl Releases From Our Friends In The US