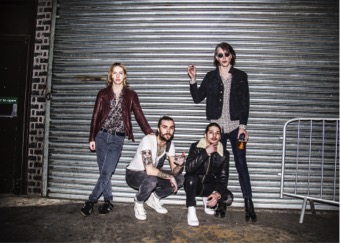 Having established themselves as one of the hottest emerging acts on the planet, The Hunna celebrate signing with leading US independent record label 300 Entertainment (Fetty Wap/Highly Suspect/Young Thug/Coheed & Cambria etc) by releasing their brand new single ‘You & Me (Hunna Tree)’. The band’s boldest statement to date, it is the kind of high-octane anthem that is set to move audiences around the globe this summer.

‘You & Me (Hunna Tree)’ premiered on Consequence Of Sound and effortlessly captures the culture of The Hunna and is a fast-paced, backs-to-the-wall rock anthem, drenched with addictive melodies and crushing tones. Lead singer / guitarist Ryan Potter sings “Not just a band but a family”, a lyric aimed at the band’s loyal following who they consider part of the amazing journey and feel-good outlook created by The Hunna.

Working with esteemed producers Tim Larcombe (Halsey, Lana Del Rey) and Duncan Mills, the band have delivered an anthemic call to arms for The H-Squad and a middle finger to those who just don’t want to enlist. “It’s about us as a band – taking the negative things that people have said and sort of turning it around,“ muses Ryan. “It’s about the fans as well, it’s for the Hunna family – the people who have been there from the very beginning.”

With an army of fanatical followers and supporters including the likes of BBC R1’s Annie Mac and Huw Stephens and Apple Music’s Zane Lowe, it’s unbelievable to think this explosive UK four-piece were only launched six months ago by fast-rising UK label High Time Records, also home to indie-darlings Coasts.

Off the back of their debut release ‘Bonfire‘ / ‘She’s Casual’ The Hunna had sold-out three nights at London’s Boston Music Rooms, something no artist had previously achieved. By their second single, ‘We Could Be’, The Hunna were making waves globally via the iTunes and Spotify Viral charts and had sold-out their debut headline UK Tour as well as shows in Amsterdam, Paris and Berlin.

Looking ahead to a full throttle summer that includes an even bigger headline UK tour, The Hunna will also make their maiden voyage to North America, with a date at New York’s prestigious Mercury Lounge which will be followed by a headline tour. It’s clear that The Hunna are destined for the dizziest of heights but the hard part is predicting just how quickly they’ll reach that fate.

Still only 6 months old, this is likely to be the last opportunity to see The Hunna in a small room.