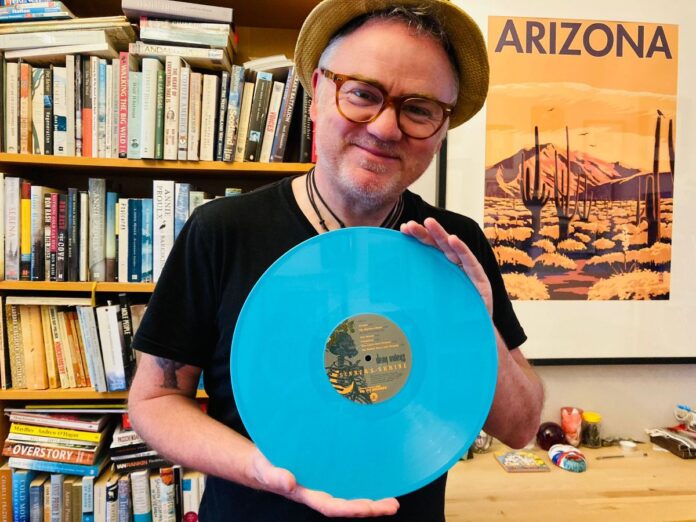 After a full year stuck in manufacturing limbo (caused by a perfect storm of a global vinyl shortage, Brexit, Covid and the war in Ukraine affecting the Polish pressing plant which was already labouring from over demand/under capacity) – Dean Owens is delighted to finally have confirmed supplies and a 29th July release date for the vinyl of his very highly praised Sinner’s Shrine album.

The 11 track album (specially mastered for vinyl) is manufactured on “Tucson blue” turquoise vinyl, with a gatefold sleeve, showcasing the stunning bespoke artwork by Luisa Carmela Casasanta and design by James Morrison.

The music is a rich fusion of Dean’s Scottish roots and the lush, swirling desert sounds of Calexico, with each song creating its own world – stories of sinners and saints, love and lust, the displaced, the wanderers and the border ghosts. It has been described by many listeners and reviewers as a “perfect collaboration” and “a marriage made in heaven” which has produced something unique – a wonderful melange of sweeping mariachi Latin rock and sounds from Scotland’s post industrial heartlands.

The songs on Sinner’s Shrine are the sound of one of Scotland’s leading songwriters pushing his own boundaries, the lyrics sometimes impressionistic, but with universal stories, emotions, and a hooky chorus, at their heart. There is darkness and light, from the plight of refugees in The Barbed Wire’s Still Weeping and La Lomita to tender love songs like Summer in Your Eyes and the touching melancholy of Compañera; the full throttle panavision sweep of New Mexico and sensual Cumbia sway of Land of the Hummingbird.

To mark the occasion of the vinyl release, he is releasing a new video/single, Arizona, the opening track on the album. The video (created by regular collaborator Ruth Barrie (Waltzer Films)) is a road trip through Dean’s favourite US state, with wide, sweeping birds’ eye views of some of its most memorable landmarks, including the Painted Desert, Horseshoe Bend and Monument Valley, with giant Saguaro cacti and prickly pears punctuating the desert landscape, and intimate shots of the Sinner’s Shrine in downtown Tucson.