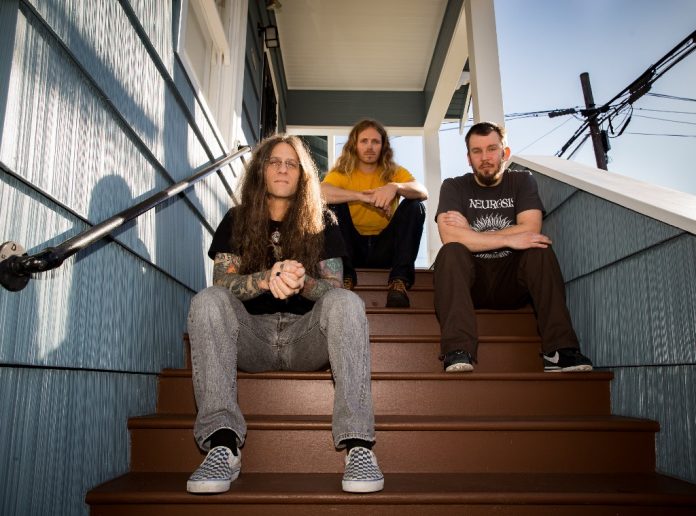 YOB has announced the deluxe reissue of The Great Cessation. Originally released in 2009, the trio’s 5th full-length record is a master lesson in cosmic Doom.

Epic, crushing, and heavy beyond words, YOB achieved legendary status in recent years due to their unmatched aesthetic and incredible body of work. The Great Cessation is a flawless document of a band ebbing and flowing between thunderous, skull-splitting riffage and rhythm to meditative moments of introspective psychedelia; an essential piece in the pantheon of YOB’s illustrious output. This definitive edition has been completely remastered by Heba Kadry (The Mars Volta, Diamanda Galas, Slowdive) and includes stunning new artwork plus two bonus tracks (previously only available on vinyl).

“With The Great Cessation, we were revitalized from our break, we just had Aaron join the ranks with the single best new potential member audition (since Travis) and the album basically wrote itself. When we broke up, we played generally to very small crowds in a very small scene. When we came back, our return was met with a scene that has caught up to what the genre’s best had to offer, and we all of a sudden had opportunities we’d never had before. Hell, we did shows with Electric Wizard, Orange Goblin, High On Fire, that were attended by 50-ish people in the early 2000’s.”

YOB’s deluxe reissue of The Great Cessation is due out December 8th on CD/2xLP/Digital via Relapse Records. Physical packages and digital order are available via Relapse.com HERE and all digital retail outlets HERE.

Additionally, YOB has announced a brief run of dates in 2018, including appearances at Modified Ghost Festival in Vancouver and Sabertooth Festival in Portland. A complete listing of dates can be found below.

Burning The Altar
The Lie That Is Sin
Silence of Heaven
Breathing from the Shallows
The Great Cessation
Blessed by Nothing (Bonus Track)
Pain Like Sugar (Bonus Track)
YOB Tour Dates: