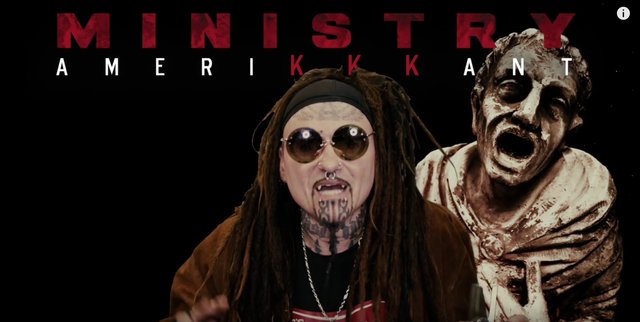 At long last, the day has arrived when Ministry’s provocateur-in-chief Al Jourgensen – never one to shy away from making political statements – can share with the world the fruits of what started as what he thought was a bad, bad dream on November 9, 2016…the day the world woke up to find that Donald J. Trump had been elected President of the United States. Ministry’s AmeriKKKant is in stores today.

In this release day trailer, Al provides one last look at what we can expect from the new album:

According to Al, the album’s lead-off track ‘Twilight Zone’, harkens back to the chilling moment of realisation: “How did this happen??”. ‘Victims of a Clown’ looks at American citizens, those who were about to be led by a man with no intellectual curiosity or emphathy. ‘TV 5/4 Chan’ looks at Trump’s followers who get wrapped up in their little soundbites for TV, put out their own ‘fake news’ and then crawl back into the hole they came from. ‘We’re Tired of It’, ‘Antifa’ and ‘Wargasm’ make up a trilogy that screams “We’re not snowflakes!  We’re not going to be led around by the nose, we’re going to stand up for ourselves!” . The next track, ‘Game Over’, illustrates the realisation of the ‘new reality’ of what happened, how we got caught in Trump’s BS.‘AmeriKKKant’ closes the album with a look at the journey of what’s been going on, what brought us to a place where the American people would vote for a man like Trump.

To support the release of AmeriKKKant, Ministry will headline a 7 date UK, with the dark and atmospheric singer-songwriter Chelsea Wolfe supporting.