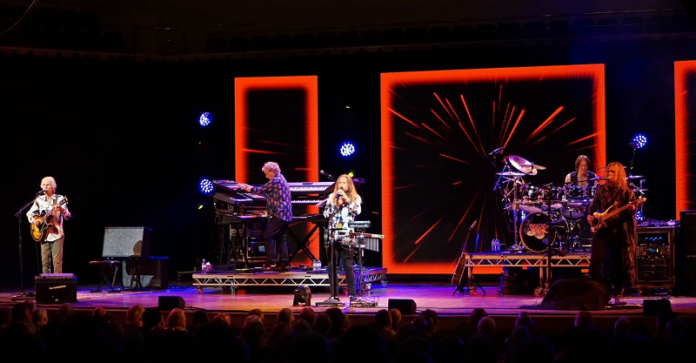 Progressive legends YES have announced UK dates for their long-awaited Album Series 2023 Tour featuring their 1974 Relayer album in its entirety together with a selection of other classic YES favourites. Tickets are on sale from 10am on Friday 14 October.

The Relayer Tour was originally planned for 2020 but postponed due to the pandemic and last year’s highly successful 50th anniversary of their legendary Close To The Edge album.  The Royal Albert Hall was the original choice for the tour’s London show but has no availability, so the band will make a nostalgic return to an old haunt, the former Hammersmith Odeon.

The show will comprise of two sets by the band. The first will feature favourite classic tracks from YES’s extensive catalogue. YES will perform Relayer, their seventh studio album, in full in the second set. Relayer marked a slight change in direction bringing an edgier feel to this album. At almost 22 minutes in length, the opening track Gates Of Delirium included a battle scene between keyboard and guitar.   The battle gives way to the beautiful closing ballad Soon, a prayer for peace and hope.

Relayer continues with Sound Chaser, a prog-rock-jazz fusion experiment demonstrating the power of Alan White and Chris Squire, and To Be Over, a calm and gentle conclusion to the album, based on a melody by Steve Howe and Jon Anderson.

Released in late 1974 on Atlantic Records, Relayer continued YES’s success reaching number 4 in the UK album chart and number 5 in the US Billboard chart.

The UK Relayer Tour dates for 2023 are as follows:

Tickets from Yesworld.com, Bookingsdirect.com and all usual outlets.

Formed in 1968 by Jon Anderson and the late, and much-missed, Chris Squire, YES have been one of the most innovative, influential and best-loved bands in rock music history. Their 1970s albums The Yes Album, Fragile, Close To The Edge, Yessongs (a triple live album set), Tales From Topographic Oceans, Relayer and Going For The One were ground-breaking in musical style and content. Their music also became synonymous with artist Roger Dean whose distinctive YES logo design and artwork adorned the lavish gatefold presentation sleeves of many YES albums.

With sales of over 50 million records, the Grammy-award winning YES were inducted into The Rock And Roll Hall Of Fame in 2017 where they performed Roundabout from the album Fragile and the FM radio-friendly Owner Of A Lonely Heart from the 1985 album 90125.

YES released their 22nd studio album in 2021, The Quest, which went to No. 1 in the UK Rock Albums Chart and entered the Official UK Album Chart at No. 20.

In May 2022 came the sad news that drummer Alan White, ever-present in the YES line-up for 50 years, had passed away. The news came shortly before the band embarked on their 50th anniversary tour marking the release of their classic, genre-defining album Close To The Edge.