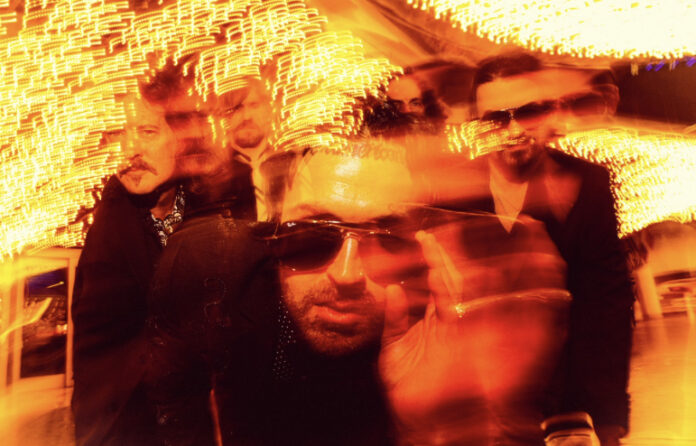 Today, superstars Yelawolf, hailed as “one of hip-hop’s most vital voices” by The Guardian, and Shooter Jennings, one of the Americana world’s most sought-after producers and songwriters, have released the self-titled debut studio album for their dynamic new rock project Sometimes Y. PRESS HERE to listen. Produced by two-time GRAMMY Award winner Jennings, the 10-track collection – available via Yelawolf’s label Slumerican – features the previously released singles “Make Me ABeliever,” “Rock & Roll Baby” and “Jump Out The Window,”which have amassed nearly 6 million views collectively on their official music videos. Coinciding with today’s album release, Sometimes Y has issued another visual component from their arsenal for their driving new single “Radio.” PRESS HERE to watch the official music video for “Radio,” directed by Spidey Smith, and check out the first look with SPIN. The songs off Sometimes Y, which have drawn comparisons to everyone from The Killers and Kings of Leon to Bruce Springsteen and Arcade Fire, are featured on a variety of key playlists across DSPs, including Spotify’s Pure Rock & Roll, New Noise, All New Rock and It’s Alt Good, Apple Music’s New In Rock and New Music Daily, Amazon’s Rock Arena andFresh Rock, and YouTube Music’s Maximum Decibels, and receiving support from alternative radio stations across the country as well as SiriusXM Alt Nation’s Advanced Placement.

“What can I really say about this body of work we put together other than it’s fucking killer!!,” exclaims Yelawolf. “I’m so damn proud of this band and Shooter’s production. It’s been a long time coming to get to this point in my career, and personally a goal long overdue that I set to achieve much earlier in life, but it would never have been the same had I done it before. It’s bittersweet to know it’s finally out. We’ve been sitting on it for nearly two years and I relished listening to it in private. It was like having the raddest shit I’d ever done and no one had a clue what I was sitting on. I’m stoked to carry my existing fans into this new chapter and to bring all these new fans into the house of rock and roll that we just added another room too.”

“Today is a day I’ve been waiting for for nearly two years,” shares Jennings. “In 2020, after a decade of expressing a desire to collaborate, alongside band members Jamie Douglass, Ted Russell Kamp and John Schreffler, Yelawolf and I finally came together to create Sometimes Y. The project itself is a reflection of our mutual love and admiration for the history of music, as well as our desire to always break new ground. This record represents a beautiful moment when a perfect storm of creative collaboration met with a validation of a life’s work between bandmates. The end result is one of my most proud moments in my musical journey. I couldn’t be more grateful for the opportunity to create this album alongside our outstanding frontman. I’m excited for the world to hear it.”

On paper, Yelawolf and Shooter Jennings might not seem like the most obvious combination. But after listening to their collaboration as Sometimes Y, you’ll quickly come to understand that their chemistry, built from a decades-long plus friendship, is in fact as intoxicating as it is unexpected. Sometimes Y is a bold and exhilarating rock and roll hybrid, one that fuses past and future sounds to conjure up some alternate universe where David Bowie fronted Thin Lizzy or Axl Rose sang with The Cars. The songs on the new album are as addictive as they are unpredictable, mixing ’80s bombast and arena rock energy with country earnestness and hip-hop swagger. Jennings’ production work is lush but never crowded, and Yelawolf’s lyrics are utterly arresting, grappling insightfully with purpose and perseverance, struggle and triumph, pain and transcendence.

The duo first introduced the eclectic project with the infectious lead single “Make Me A Believer,” which channels the nervy charm of Ric Ocasek and the indelible hooks of Rick Nielsen as it reckons with self-worth and the need for external validation. The brooding follow-up “Rock & Roll Baby,” and its compelling visual, suggests a more psychedelic Lynyrd Skynyrd in its reflection on the spiritual and emotional consequences of growing up too fast. On “Jump Out The Window,” Yelawolf’s stellar vocals channel Tom Petty on the rapturous tale of heartache, while”Radio” (which sounds like something straight out of the soundtrack to some long lost, cult favorite ’80s sci-fi action flick) spirals out of control in single-minded pursuit of the hustle. Opening Sometimes Y is the fierce title track that displaysYelawolf’s lyrical ability as he spits out his lines a mile-a-minute.Perhaps the most revelatory throughout the album is Yelawolf’s versatility and strength as a vocalist, as evidenced on the mesmerizing “Hole In My Head,” the slow burning piano ballad “Catch You On The Other Side,” or the intense “Fucked Up Day.” Full track listing for Sometimes Y below.

Weighty as the record can feel at times, it’s ultimately a work of liberation and release, an ecstatic declaration of creative freedom fueled by adventure, discovery, and a little bit of chaos, which is precisely what Sometimes Y is all about.