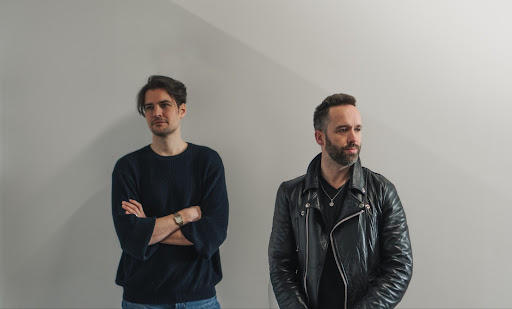 Pairing suitably high octane visuals to their killer debut offering, the alternative-rock duo of Sam Jenkins (ex-Glass Tides) and Paul Bowe (ex-Federal Charm) are back with a bang.

Shot in the French motor racing capital of Le Mans at the height of the 2022 summer heatwave, the official video for “Shut Up A Second” finds minds and logic melting in unison with the tarmac.

Unravelling the story of a sinister masked conspiracy theorist (dubbed ‘Qing Qonspiracy’), the video documents his disappearance down the rabbit hole as he discovers the route of all evil: GRAMMS. With the masks and ‘Tin Foil’ crown all personally designed and made by the band’s Sam Jenkins, he reflects of the new video:

“It’s a glitchy claustrophobic cautionary tale that pokes a bit of fun at the ‘truther’ mentality…  The masks have mouths for eyes and represent the modern societal urge to spout every little thing that comes to mind.”

The official video was directed in collaboration with Paul Peterson; a prolific performance artist and musician from England who now lives and works in France.

Punchy and provocative, the new cut provides the perfect accompaniment to GRAMMS’ devilish debut single: “Shut Up A Second“. Fusing gnarled classic rock thrills with a modern production sheen, the single packs the kind of brutal punch you’d expect in a face/off between Royal Blood and The Black Keys. A track about social inequalities and a society more divided than ever, the message behind “Shut Up A Second” couldn’t be any more apposite right now.

GRAMMS is Sam Jenkins and Paul Bowe  — a brand new alternative rock duo with notable previous history. Well-versed in the mechanics of making music — Sam with Glass Tides and Paul as a founding member of Federal Charm — the two-piece have toured extensively both nationally and internationally, and graced stages at many of the world’s largest festivals including Glastonbury and Download. Their music has also scored airplay across national radio, including BBC Radio 1, Planet Rock and Capital FM.

Having wracked up an impressive resume between them and each earning their own die-hard following along the way, the two-piece are now ready to cause a stir with their rip-roaring new venture.

With further music expected to be revealed before 2022 is out, stay tuned for the next instalment from GRAMMS in the coming weeks….