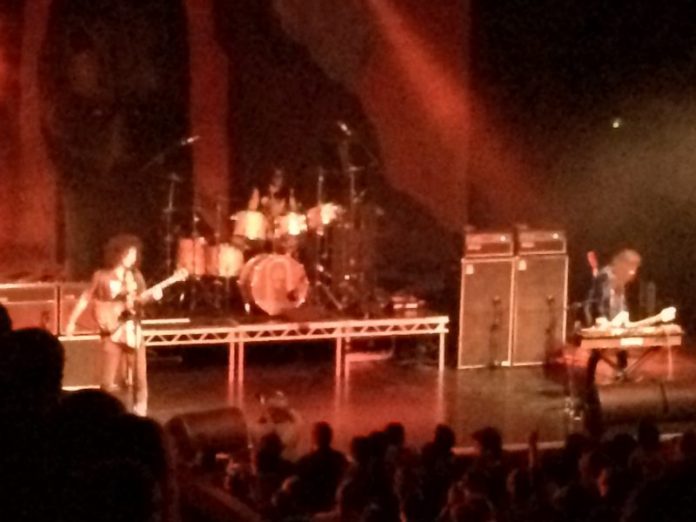 Andrew Stockdale gets his mojo back

While Cincinnati’s Electric Citizen are making their first visit to Birmingham tonight, the music they play owes a pretty big debt to the legends this area has produced. A wonderfully retro concoction is their brew of of choice, and the five piece are very good at it too – as you have to be with the market as crowded as it is right now. “Beggars Need” ushers in the set on the back of some mighty riffing and begins what essentially is a 35 minutes of two halves. The first few largely are culled from the “Sateen” album, with the later ones coming from the new album out next month. “Misery Keeper” which sees drummer Nate Wagner thump his kit with maracas before guitarist Rob Dolan soars away with a solo, is especially impressive. The last track, “Evil” showcases a more NWOBHM side to things as they add a harder edge. Front lady Laura Dolan is a fine counterbalance to her husband, and her performance is as captivating as the band as a whole – now including a full time keyboard player in the newly added Katie – are interesting and classy.

The key to Wolfmother’s entire set comes about halfway through this glorious 90 minutes. “Are you ready to enter another dimension?” Enquires Andrew Stockdale – the man who has piloted the good ship Wolfmother through more choppy waters than he cares to remember for a decade now – “lets go!” He yells and, as the enthusiastic crowd goes collectively crackers, he begins what appears to be a dance of joy. It’s fair to say that he’s got his mojo back, and it’s also fair to say that this is a very different display from a slightly lacklustre showing in this room just over six years ago.

Much has changed since then of course, not least there’s been a couple of albums, the last of which – the stunning “Victorious” – has been out for a couple of months. There’s plenty from it too, including the show opener and title track. Even better MV’s favourite new one “City Lights” is played for the first time on the tour, but this is a clever set that merrily understands this bands fine legacy.

Their debut record is 10 years old. And at least for a little while, we can stop wondering how the bloody hell it came out a decade ago and relive it’s brilliance again. It appears that the rest of Birmingham has a similar thought, given that the the opening bars of “Woman” are greeted with the type of reception only music that truly connects is afforded.

The equally fantastic – and ok, if MV is pushed, our favourite Wolfmother album – “Cosmic Egg” isn’t forgotten either and “New Dawn Rising”, given second song status here, as well “White Feather” are stunning.

An incredible “Vagabond” which ends the main set, neatly distills all that’s great about not just the band, but this version of it. Stockdale doesn’t say much throughout, he doesn’t need to. He’s got the voice of a rock god and the captivating presence of a true star. Bass man-cum-keyboardist Ian Peres is mass of hair wrapped up in a dervish, who rewrites the rules on enthusiasm, while experienced drummer Alex Carapetis treats his kit like it’s just asked his mum out – his stunning performance drives the whole thing and his work on “White Unicorn” is incredibly aggressive.

They return for an encore and if “Vagabond” is great, then “Joker And The Thief” sees the energy levels rise and the electricity flow through the crowd one last time.

Wolfmother might have had some ups and downs, but one thing has never changed: The music has always been great. Tonight their live display was every inch what the songs deserved and they really did emerge victorious.