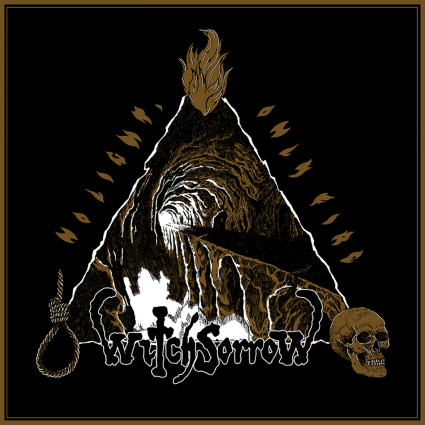 Back in July MVM had the pleasure of seeing Witchsorrow in what very much is their natural habitat. The basement of a rock pub in Birmingham as they headed up a magnificent evening of doom tinged grooves.

They can pull such an evening off with their eyes shut, and the air was thick with the vibes that only such a gig can muster while they played their hour long set at the end of the night.

The challenge for the band now, though is to channel the smokey, eeriness off on their recorded output, and “No Light, Only Fire,” pulls it off some rare aplomb.

It’s been three years since their “God Curse Us” album and they’ve honed their craft, and for this one they again work with metal Producer Chris Fielding, and he has really brought them along.

The trick here is that they allow themselves the room to step back, have a look round and take in the putrid air. There are some real meandering epics here, “De Mysteriis Doom Sabbathas,” clocks in at a mammoth near quarter of an hour, but it allows the band the chance to slow things down to a funereal pace, as the opening section alone seems ready to move mountains such is its magnitude. It’s well into its fifth minute before it bothers to even try and become a conventional song, and even when it does, it seems that singer Necroskull (possibly not his real name) is coming from another world, summoning up who knows what from down below, while “Disaster Reality” which clocks in at veritable punk rock 11 and a half minutes, gives itself a real contrast. Light and airy sections mingle extremely happily with something altogether more extreme.

But the real difference between Witchsorrow and some of their obvious modern brethren is their ability to mix it up on a grand scale. “Four Candles” (disappointingly for the geeks amongst us not a homage to The Two Ronnies) is instead a gorgeous, summery acoustic strum.

“….Fire’s” calling card though is altogether not acoustic. Beginning with its almost title track “There Is No Light, Only Fire” and quickly logging itself into a huge groove that is at once familiar but modern, they set down a marker that they almost dare themselves not to dip below.

It’s a mark of the quality on show that this challenge is met, “The Martyr” for example does something monstrous, and if the shadow of Black Sabbath is never too far away, then you suspect that the band don’t care, but moreover it never becomes pastiche, and on occasion doesn’t stray too far from work of bands like Alunah (give or take the fact the Brummie doomsters have a female singer) or the Electric Wizzard.

They deserve credit too for keeping the vocals clean. Too many releases of this type get caught up with a mixture of clean or harsh singing, this never does and thus becomes far more accessible than some music from this extreme might ordinarily be.

Songs here like the brilliant “Made Of The Void” and the even better “Negative Utopia” are just that. Songs. They are the work of a band that wants to explore their sound and prefer not to worry about structures, instead eschewing such things in favour of the feel and the tone of the work.

Indeed, that’s what makes “There Is No Light, Only Fire” quite so good. Sometimes you listen to a record, to a band, that doesn’t seem to know what it or they they want to be. Witchsorrow, however, are absolutely steadfast in the belief that they want to make heavy doom metal.