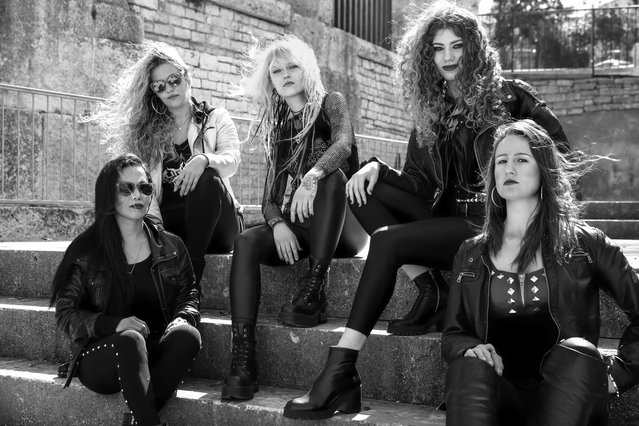 Burning Witches are not only the hottest export from the Alpine Republic, the five piece from Switzerland are also one of the most thrilling newcomers in old school heavy metal spanning the last few years – globally! The band whose members are all die-hard metal heads, have already captivated the press with their first single ‘Burning Witches’ (released in their founding year of 2016), and were subsequently awarded “Demo Of The Month” in both Metal Hammer Germany and Rock Hard Germany. Their powerful sound is characterised by the strong compositions of band founding member Romana as well as by the expressive tone of vocalist Seraina, who has achieved countless comparisons to Rob Halford.

The young Swiss talents have already made a name for themselves with their self-titled debut album, and received ample attention from heavy metal fans worldwide. It’s no surprise that the biggest heavy metal label in the world, Nuclear Blast, offered them a deal earlier this year!

Burning Witches don’t understand the terms “rest” or “stagnancy”, and so their next enchanting masterpiece is already brewing in their cauldron. The book ‘Hexenhammer’, which legitimised the witch-hunts of 1486, is the focus of the new record’s lyrical content. It’s about oppression, violence against the weak and manipulation of facts; all topics that are timeless and more significant now than ever. The forthcoming record was produced in the Little Creek Studios by the same team as its predecessor: V.O. Pulver (Pro-Pain, Destruction, Nervosa, Pänzer) and Destruction legend Schmier, who helped and advised as a close friend of the band. The result is a truly brilliant heavy metal album, destined to take away the breath of headbangers worldwide, and of course make the people bang their heads!

The new, as of yet untitled album will be released this winter via Nuclear Blast.

In January, Burning Witches will head out on an extensive tour throughout Europe – including a show at London’s Underworld – as special guests on Grave Digger’s ‘Tour Of The Living Dead’. All dates can be found below.

Romana commented:
“We were really happy when Chris Boltendahl came up to us at the Bang Your Head!!! Winter Festival to ask if we were interested in joining Grave Digger out on tour. That’ll be the first big tour for us and it’s an honour to get a chance like this as a new act. Since our second record will be released in the winter, the timing of this run couldn’t be more perfect! We’re super excited & READY TO FIGHT!”