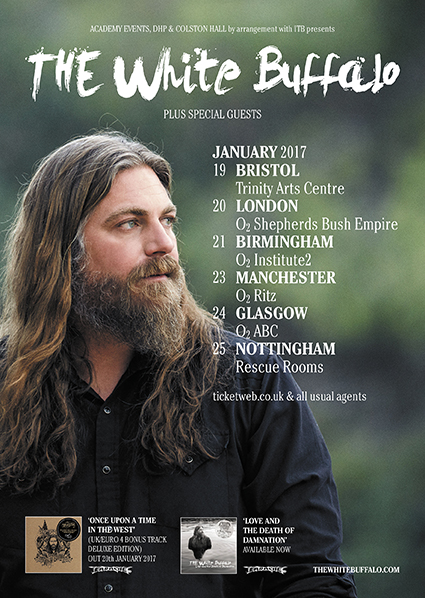 Now hailing from Brooklyn, Jarrod Dickenson was born, he explains, in Waco , Texas. Notable as he says for being home to both Dr Pepper and David Koresh. Maybe that’s what they meant when they had that ad slogan? What’s the worst that can happen, indeed. Either way the effortlessly affable Dickenson is appearing tonight as a solo artist and his stripped down half an hour is full of dustbowl country. “Ballad Of The Lonesome Traveler” sums his whole ethos up, while “Rosalie” is a gentle and lovingly played. Also airing a couple of new songs from an album that is out in the spring (“I hope you don’t mind the new ones, you’re probably bored of the hits anyway” he deadpans). The acerbic “Gold” – written with David Ford, is perhaps the pick, although “Nothing More” is a fine song too. There is much here to suggest that his return for a full band set later in the year is to be warmly welcomed.

When people talk about the guitar heroes as “axe wielding” they usually mean the electric version. The riff kings. But its not always as simple as that. On the day when people marched in protest across the world, it is worth remembering that Woody Guthrie carried an instrument with the words “this machine kills fascists” on it. In the right hands the acoustic is very much the formidable weapon.

Jake Smith, frontman with The White Buffalo, wields his like he means it. Things might start in a quiet, understated way, with “Radio With No Sound” but everything else for the next hour and a half is attacked with a rare vigour.

We already knew this, the three piece (and if Smith is The White Buffalo, then livewire drummer Matt Lynott, bass man – and serial pirouette merchant – Christopher Hoffee are very much integral to the herd) are making their second sold out visit to this room in six months. Such was the show last time, that perhaps the sense of anticipation is even greater for tonight. TWB too, seem to realise this and up their game to incredible levels.

The dedicated fanbase scream the lyrics to “Oh, Darlin’ What Have I Done”, the band veritably spit out “Joey White” like Steve Earle playing a punk rock song, “Dark Days” is a real highlight and “Come Join The Murder” is dark country done so, so right.

The relative shortness of the songs means – these vignettes are rarely over four minutes – mean they just keep coming at you at breakneck speed and with special skill. The trio do allow themselves one moment to breathe, the psychedelic tinges  of “One Lone Night!. The rest is breathless. What makes them so good is that no one writes love songs like “Home Is In Your Arms”, the glorious “Go The Distance” (its line “you’re not just my woman you’re a piece of ass” remains one of the great lyrics of the modern era) and “Joe And Jolene” and it’s doubtful whether anyone else has the dark and twisted imagination to come up with “The Whistler” either.

That last gem ends the set, but Smith returns for a solo version of “Wish It Were True”, Hoffee and Lynott return for a gorgeous, tender “Love Song #1” (dedicated to Smith’s wife) before the rabble is roused one last time with a stone cold brilliant “How The West Was Won”.

All of which is proof of a band that is in the great country tradition, but is much more. Moreover, The White Buffalo are a band ready for that leap into the mainstream. The west, east  and all points elsewhere will soon surely not be able to resist.