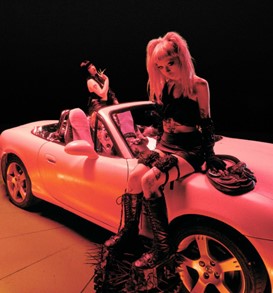 With over 400 million streams of their critically-acclaimed debut EP ‘Worldwide Torture’, Jazmin Bean is already one of the UK’s worst kept secrets.  Now, the Island Records/Interscope recording artist has unleashed ‘Carnage’ – the new single out today.

Speaking of the track, which was made with Jessica Winter, Jazmin says: “Carnage is a song about getting what you want no matter how difficult it may prove to be or what opinions come about in the process, it was really a love letter to my end goal and every day I get closer to that goal.”

Having previously been tipped by the likes of Vogue and Dazed, Jazmin is one of the UK’s most talked about visual creatives and founder of the vegan and cruelty-free makeup brand Cult Candy Cosmetics. They have had a busy 2022, spending much of the year writing and recording with multi-platinum selling producers (Jonny Coffer, John Feldmann, Matt Schwartz and Rick Nowels),  and starring in a campaign for legendary British fashion brand Burberry.  A captivating live performer, Jazmin has been added to the iconic lineup for Download Festival 2023 – fresh from their sold out headline show at London’s Courtyard Theatre.

Jazmin is a multidisciplinary artist, specialising in music and film, who has spent much of their life in London. But they are tenuously tied to everywhere, creating and collaborating with artists across the world thanks to a life spent online.  Having already amassed over 120 million YouTube views, nearly 1 million TikTok followers and well over half a million Instagram followers and Spotify listeners – they are the sound and spirit of Generation Z’s genderless subculture – unapologetically impossible to define.

Jazmin’s otherworldly visuals are a melting-pot of inspiration, leaving you as intrigued as you are uncomfortable when drawing back the curtain.  If we have grown accustomed to care-free euphoria pop becoming commonplace in the charts, then prepare for everything to be shaken up. Jazmin is here, and they are about to fuck with everything we are familiar with.