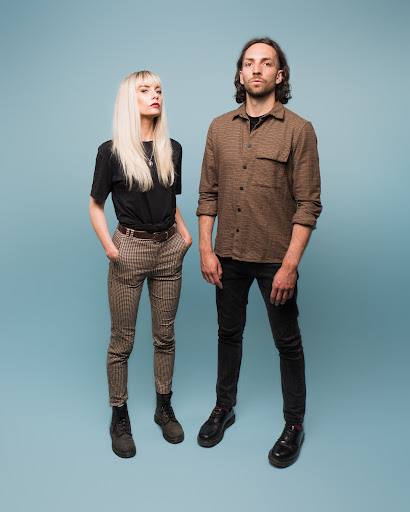 “Lucky Ones” is the visceral new single from PAVE THE JUNGLE.

The latest cut to arrive from their fast-approaching EP ‘Waiting For Nothing‘ (out 26 November, via Cow House) finds the band in reflective, incisive form.
A blitz critique of small-town life in the UK and how growing up in one of England’s most remote areas has ultimately shaped her approach to writing music, “Lucky Ones” finds a singer torn between its virtues and vices in equal measure. As Rachael Whittle explains:

“Alongside the expected truisms of small towns: boredom, insularity, alcohol abuse, petty feuds and violence; the song hits upon some of the virtues, as well. A strong sense of identity, belonging, and close-knit community. Things that are so innately human, but so easily lost in the haze of modern life.

The song took shape very late one night in my old flat, hence the calmer vocal style. When we got to the studio we thought this suited the track, and so it stayed.”
At odds with Whittle’s sonorous tones, Pave The Jungle capture the conflict of the narrative with a score of pure alt-rock carnage. Homing-in on the band’s math-rock influences, the duo find themselves completely in-sync as they hurtle through a track riddled with idiosyncratic rhythms, blistering key changes and a furious pace. Already a fan favourite at their live shows, “Lucky Ones” is destined to go off with a bang as the band begin their 12 date UK tour on 5th November (full dates and details below). As Rachael adds:“It’s very fun to play live. Loads of twists and turns. One viewer on a livestream set we did recently said it sounds as though we’re “chasing each other around a field”. I can definitely get behind that!”
“Lucky Ones” follows recent singles “Picture of Health” and “Oddball“, all of which were mixed by Spring King / Dead Nature’s Tarek Musa and are confirmed to appear on their upcoming new EP: ‘Waiting for Nothing‘. Turning heads with their debut EP ‘The Hissing‘ (which was released physically in 2021 via Du Blonde‘s new label Daemon T.V.), the duo earned praise from titles including Punktastic, NARC and DIY, and more. Following a spate of recent studio sessions over the ensuing months, the band’s second such collection will be available on 26th November 2021, via Cow House.
Catch Pave The Jungle touring ‘Waiting For Nothing‘ at these dates and venues this November: