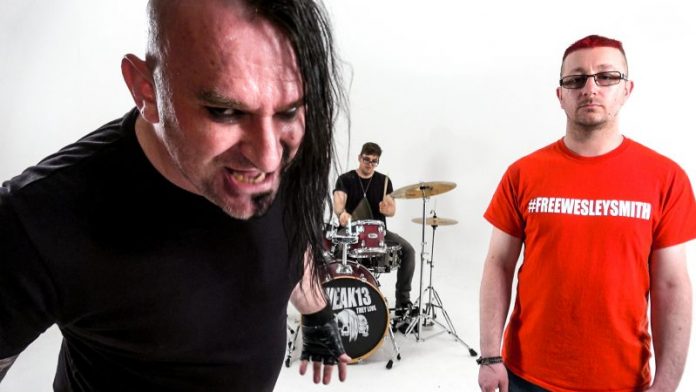 Underground British band rock WEAK13 shocked many of their supporters due to a surprise collaboration with top Birmingham hip hop artist FONZi NeuTRON.
A music video for a song titled “Frequency” emerged on the official Facebook and YouTube channel for rapper FONZi NeuTRON which reveals WEAK13 frontman & guitarist Nick J Townsend and Bassist Wesley Smith performing with him. The song which has a very underground 90’s feel has already gone down well with hip hop audiences and this seems to confirm that WEAK13 have no plans on staying quiet whilst they write the follow up to their well received debut album ‘They Live’ .
Earlier this year WEAK13 surprised their audiences again by revealing a love for British band Depeche Mode after releasing the Halo single; a rock fueled cover of the classic tune which first appeared on the 1990 Violater album. The single which is now available in Europe, Asia and the UK on Spotify, Amazon and iTunes sparked much debate on the internet with fans from both camps argueing with each other. Whilst some Depeche Mode fans appreciated how WEAK13 had made Halo “their own song” as it was recorded in their style whilst simultaneously saluting the original; others objected to the heavier take on it. WEAK13 themselves of course were happy with the controversy caused by their version of the tune.
https://www.youtube.com/watch?v=NKld43dEDe0
WEAK13 are still writing and recording their second album but many fans are enjoying the surprise cover releases and collaborations that are emerging whilst they await it. Rumours are circulating of future cover versions by WEAK13 of established songs. For more info on WEAK13 go to weak13official.com
https://open.spotify.com/album/6eO3enYQRxio7qDXDPjyya
https://www.amazon.co.uk/They-Live-Weak13/dp/B073X8SB3K