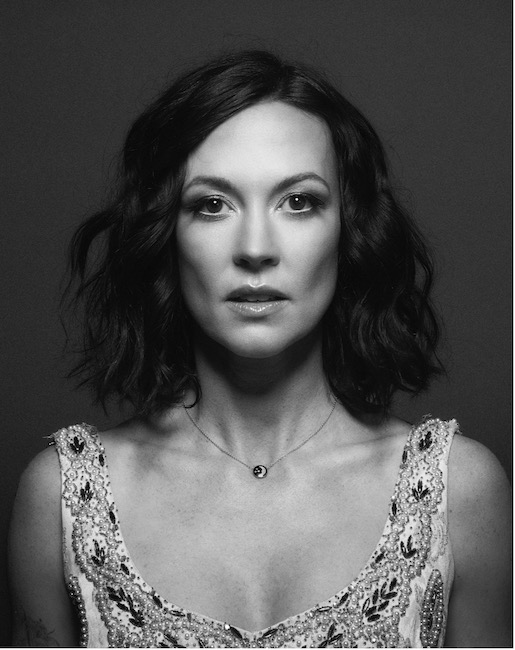 GRAMMY Award-winning singer-songwriter and violinist Amanda Shires has shared her new single ‘Take It Like A Man’. The stirring song is the title track from her forthcoming anticipated new album out 29th July on ATO Records. The official live music video for ‘Take It Like A Man’ is also out today.

Co-written by Amanda and producer Lawrence Rothman, ‘Take It Like A Man’ features Jason Isbell on guitar. The track unfurls with a haunting longing, as Shire’s bell-like vocals soar and she proclaims, “I was snared by your wrist, I know what the cost is. The octaves of consequence… I know the cost of flight is landing and I know I could take it like a man.”  Not only can Amanda “take it like a man,” but more importantly she can “Take it like Amanda,” as the last line proclaims – the clue to the entire album, and perhaps Shires herself.  “I wrote that last line, ‘take it like a man,’” says Shires, “but then I changed it. I realized you can try and do what they say and take it like a man and show that you can withstand anything. But truly you can only take it like yourself.”

WATCH ‘TAKE IT LIKE A MAN’ LIVE MUSIC VIDEO HERE

Shires will bring her dynamic live performances on the road for an extensive fall tour kicking off September 6th in Asheville, NC and running through November with stops in major markets including Denver, Los Angeles, San Francisco, Seattle, Brooklyn, Dallas and more. Public on-sale for tickets is Friday, June 24th at 10am local time (with local presales on June 23).  All tickets can be purchased at www.amandashiresmusic.com

‘Hawk For The Dove‘ was the first single and video to be released from the new album, and hailed as “moody” and “anthemic” by BrooklynVegan and appeared on Pitchfork’s “Selects” Playlist which highlights songs that their writers, editors and contributors are “listening to on repeat.” Watch the striking music video filmed on location in Santa Monica HERE. Amanda commented, “I want people to know that it’s okay to be a 40-year-old woman and be more than just a character in somebody else’s life. The song and the visual representation of the song deal with the emotions that turn prey into predator.”

It’s been a busy time for Shires. The acclaimed singer/songwriter recently performed at the world premiere of HALLELUJAH: Leonard Cohen, A Journey, A Song at the Tribeca Film Festival in New York City alongside Judy Collins and Daniel Seavy. She also gave fans an early peek at some of the new material on a livestream for the Relix Channel exclusively for Twitch, and contributed a thoughtful follow-up piece to Rolling Stone on reproductive rights, read it HERE. On June 23, she’ll perform selections from ‘Take It Like A Man’ at a by-invitation-only listening event at Desert 5 Spot in Los Angeles.  On July 23, she’ll perform with The Highwomen at Wrigley Field in Chicago opening for Chris Stapleton, followed by a special hometown sold-out solo show at Nashville’s Blue Room on July 28th to celebrate the release of her new album.

‘Take It Like A Man’ is a fearless confessional featuring 10 emotionally raw tracks, produced by the talented gender-fluid singer-songwriter and producer, Lawrence Rothman, (Angel Olsen, Girl in Red, Courtney Love). Upon hearing Amanda for the first time Lawrence said, “I was just mesmerized. I thought she was the new Dolly Parton; Dolly for a new generation.” Written and recorded during lockdown, the new record features Isbell on guitar on several tracks and guest vocals from Maren Morris and Brittney Spencer. ‘Take It Like A Man’ is a song cycle of ruthlessly candid tunes written as a document by Amanda about her life as a woman, a wife (to husband Jason Isbell) and a mother during a tumultuous time.

Since getting her start playing fiddle with the legendary Texas Playboys at the young age of 15, Amanda has brought her nuanced songwriting and boundless originality to her critically acclaimed solo albums, collaborated with the likes of John Prine and Justin Townes Earle and earned the 2017 Emerging Artist of the Year prize from the Americana Music Association (AMA). Amanda is a member of Jason Isbell’s 400 Unit and founded The Highwomen – a supergroup she also performs in alongside Maren Morris, Natalie Hemby and Brandi Carlile. The band hit #1 on Billboard’s Top Country Albums chart with their self-titled 2019 debut.