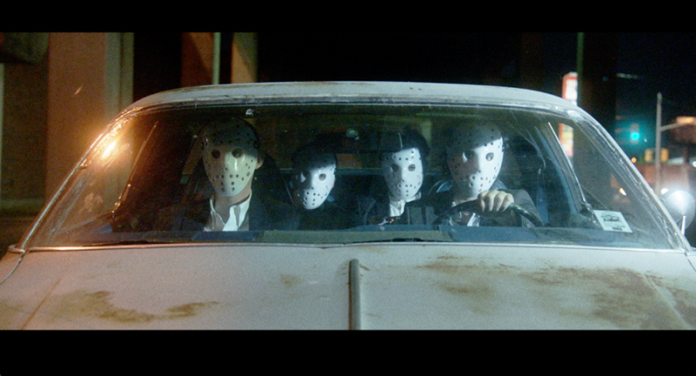 Kiwi Jr. are today sharing a new single. Watch the “make it Heat but starring Vorhees” official video for Kiwi Jr.’s “Unspeakable Things,” directed by Morgan Waters, and a new single and highlight from Chopper, the group’s forthcoming new album.

Gaudet says of the video, “People are always trying to sign into my email. What do they think they’re gonna find? The public appetite for dirty laundry is wild. Having moved the world online has not helped. Dan Boeckner had the idea to use the Moog sound for the hook, which was originally on guitar, and that sound brings the song into a sort of new-wave territory that was fun and different for us. We kept referencing the vibe of Michael Mann movies when recording the album, and then Morgan heard this and came up with the idea of making the video look like the movie Heat. Somehow TSN’s Jay Onrait, Jonah from Fucked Up, and comedians Tom Henry and Rodrigo Fernandez-Stoll were convinced to cameo in it. We also were wearing these hockey masks filming all day next to a busy road getting a lot of car honks and didn’t realize until much later that we filmed on an actual Friday the 13th.”

On August 12th, 2022, KIWI JR. will release Chopper, the group’s third album, worldwide on CD/LP/CS/DSPs through Sub Pop, with the exception of Canada through the band’s Kiwi Club imprint.  The album, which features the aforementioned “Unspeakable Things,” the previously released “Night Vision,” along with “The Sound of Music” and “The Extra Sees the Film,” was recorded and produced in Toronto by Sub Pop labelmate Dan Boeckner (Wolf Parade, Handsome Furs, Operators).

Watch the video for “Unspeakable Things” below.