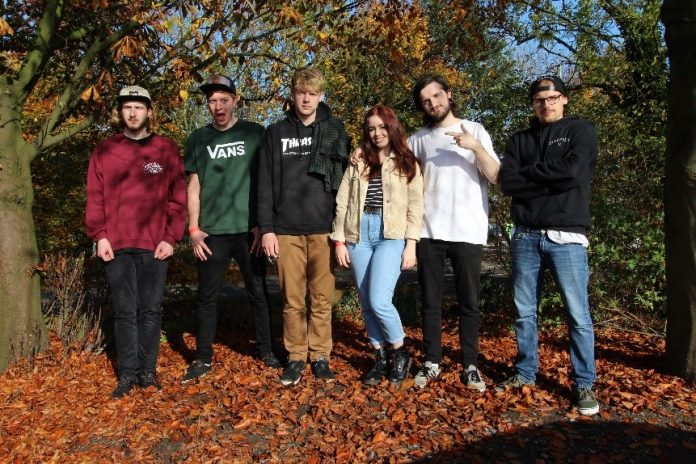 Nottingham posi-punks take us behind the scenes

“As cliché as it sounds, we just want to play our music to as many people as possible before we keel over and die,” grins Tim Bell, guitarist of Nottingham quintet Catch Fire, a posi pop-punk proposition formed earlier this year from the ashes of local heroes, Layby; “We have a burning desire to write and play music. It’s really as simple as that. I don’t think any of us can see ourselves doing anything other than this.” The good news is, with their debut E.P The Distance I Am From You boasting bangers as infectious as lead single and future floor filler, ‘Bad Behaviour’, and the soaring, emotinged ‘Anaesthetic’, it’s not likely that the lads of Catch will need to consider doing anything else, anytime soon. Following the recent release of their debut video Bad Behaviour, the guys give us an insight into it’s making.

Bad Behaviour is probably our most unique song, and we believe it represents our sound a direction the most out of all the four tracks on TDIAFY. It’s the song that represents the narrative of the EP the most, and made for an interesting video.  The video tells the story of a boy who’s in love with a girl with depression, and how she acts towards him ruins what could have been a beautiful relationship. However we wanted to put a personal twist on it, where his friends kidnap him (to save him) and to also try and make her realise what she’s losing. We didn’t want the narrative to make the video too dark and gloomy.

The video was shot by Joe Clifford over two days, across 6 locations: Ash’s House, Miles’ House, Berry Hill, White Post Farm, a pub in Farnsfield, and Mansfield. The shoot was very tiring, but it was also a tonne of fun as we got to showcase our Oscar-worthy acting skills, and eat our collective weight in Pizza and Tesco meal deals.

The most fun scene to film was definitely the kidnapping, as it was filmed in a relatively busy public park, and people were looking at us in 500 different ways ready to dial 999 – although after 11 takes, I think people began to catch on. The performance segments were also very fun, it came at a cost though, as we can all still hear the ringing of the cymbals to this day from playing so closely packed and in a small room.

When Joe sent the first draft back to us, we were amazed. We genuinely had no idea what to expect or what it was going to look like, but we loved it. He’s a great guy and we felt really comfortable with him, and we’ll more than likely be going back for another.

Catch Fire release ‘The Distance I Am From You’ on February 5th 2016. Pre-order now: