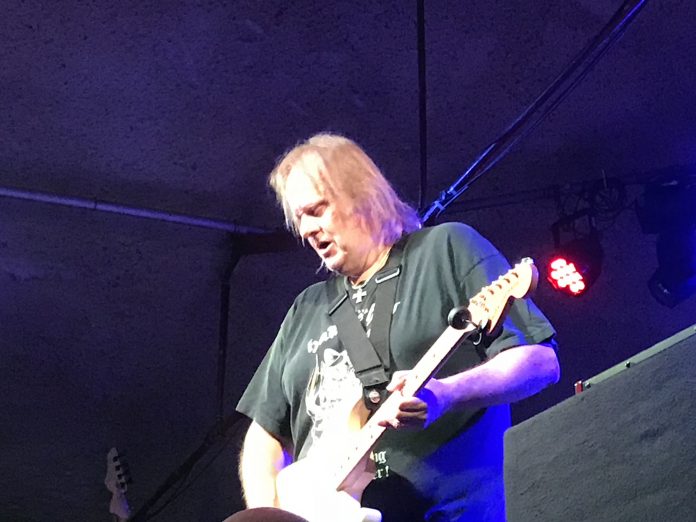 On her frequent visits to these parts over the last year or so, Sari Schoorr has shown herself to be an incredible performer. A voice that comes from somewhere deep within, is at odds with her smiling, humble stage persona. On the road testing, if you will, of the songs has seen them develop and alter – as only the best of blues does. So it is here that “Demolition Man” has a real sultry side, although it must be said that Sari could most probably sound sultry if she read her shopping list. As well as singing their own tunes, Schoorr and her wonderful band, The Engine Room, are amongst the great modern interpreters of the standards too. Leadbelly’s “Where Did You Sleep Last Night” is infused with a mighty, smoky voodoo and, when they let themselves go with “Rock N Roll”, Schoorr and her brilliant guitarist Innes Sibun do that justice too – no mean feat in the Black Country. The covers are great, but the originals are what will sustain this as a career. “Kiss Me” drips with lust, “Damn The Reason” (“if I break your heart, then take it like a man,” she roars) has a steely defiance, and “Aunt Hazel” belies its harrowing subject by being funky, strutting fun. Schoorr ends with her take on “Black Betty”, a song she has come to own with one of the boldest versions there is, and the fact is inescapable: the title of her debut record was “Force Of Nature” and she most certainly is. On this form she – and The Engine Room – are unstoppable.

During the course of his two and a quarter hours tonight, Walter Trout doesn’t need to say a lot. His guitar talks for him, after all. A couple of things he does verbalise, though, show why seeing Walter these days is so good.

“I am happy to be here,” he smiles. “Mind you, I am happy to be anywhere, I am just happy to be breathing!” Then a little later – about an hour in – he stops and says: “man, I am having so much fun up here, I’ve forgotten to play anything off the new album….”

The two things are connected. First, as everyone knows by now, Trout needed a liver transplant. He died. Twice. Then taught himself to play guitar again. His new album. “We’re All In This Together” is a joyous thing, very probably album of the year, and stuffed with more special guests then you can count. That joy spills on stage here. It is like every gig Walter plays now is a bonus and he’s absolutely going to squeeze as much into it as he can.

There is a moment when he plays Albert King’s “Cold, Cold Heart” and does so without a microphone, as if he wants to busk in your living room,  and if his versatility is beyond question anyway, then a listen to the bombast of “Put It Right Back On You” and the fragility of “Love In Vain” proves it yet further.

In the spirit of the new record, the second half of the show sees a parade of guests on stage. Rod Mayall, brother of John, plays mighty organ as he joins Gwyn Ashton on “Got Nothing Left” , Sari Schoorr is back for “Work No More” (a song written by Walter that she covered on her album) and Innes Sibun steals the show on the new album’s title track.

Blues is eschewed for just five minutes as Andrew Elt finds something primal in BB King’s “Lord Have Mercy”, before “Please Take Me Home” from “Battle Scars” (the album he wrote about his illness) changes the mood.

For this run, Trout has long time band mates Michael Leasure on drums and Sammy Avila performing his usual duties on organ and keyboards, but Avila’s son Danny is new on bass, playing a blistering solo when given the chance, and the four lock into an incredible groove on the closing classic “Goin’ Down”.  Everyone, though, is having way too much fun for there not be an encore and “Prisoner Of A Dream” is a visceral end, with one more jaw-dropping lead from Trout.

The Godfather of modern blues he might be, but Walter Trout is so much more. Seeing him live these days is one of the most joyous, uplifting experiences in music.