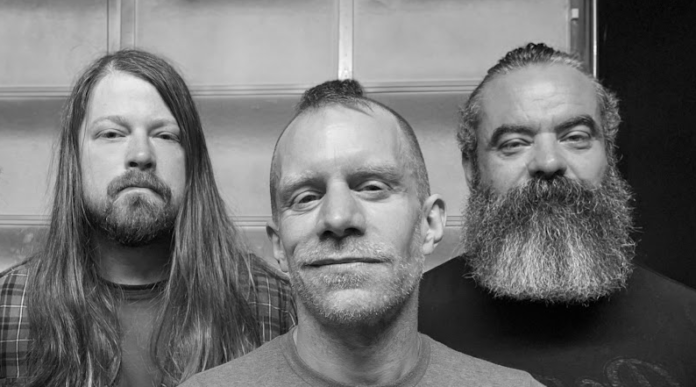 A Vulture Wake rages forth through 2022 with their second E.P. of the year! ‘Animal’, out Sept. 9, is a progressive powerhouse of hooks & riffs – 5 songs continuing the band’s campaign to “Do No Harm; Take No Shit” while taking aim at the powers that be, inner demons, and a bleak future on this dying planet.

AVW now offers solutions to the issues raised in their previous releases – commit violence, give in, leave the planet, sleep? The choice is ours.

The new single “Shadow Of A Common Fear” is a sparse-yet-pulsing hard rock gem which brings to life the feeling of a cold and desolate landscape. Set in a world of authoritarian overlords and mass uprisings, there’s danger around every corner in what is, unfortunately, an accurate portrait of human existence. Come for the rock, stay for the disturbing yet provocative tale.

On November 11, both the ‘Kingdom’ and ‘Animal’ EPs will be released as the ‘One.Kingdom.Animal’ LP.

Available on colored vinyl and limited to 500 LPs, comes with lyric insert and black inner sleeve and features artwork and layout by Jeremy Hurley. Also available on 6-panel Wallet CD.

Side A (Kingdom EP)

Side B (Animal EP)

7 – The Fool Must Be Killed

9 – Life Is Snakes.Mice Are Men

Stream the new single “Shadow Of A Common Fear” and pre-order the ‘One.Kingdom.Animal’ vinyl here: https://bfan.link/shadow-of-a-common-fear .