WACO’S GIFT OF THE GIBB 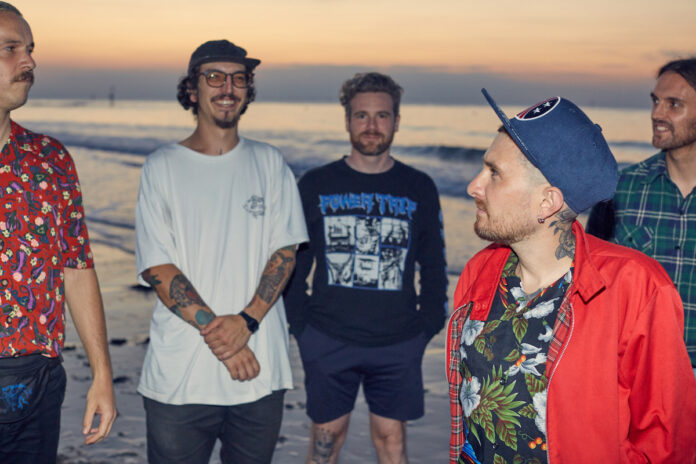 The album is available to preorder now on limited edition Pink Cadillac 12″ vinyl:https://orcd.co/rockspiritabsolutejoy

Alongside the news, the band have revealed a video for their unbelievable (but 100% true) new single ‘Barry Gibb Was My Landlord’ which is released 20th July 2022 on all good digital service providers.

The quintet have also announced a run of September 2022 UK headline tour dates in support of the album.

Commenting on the remarkable origin of the track, guitarist James Robinson says: “​​’Barry Gibb Was My Landlord’ is our ode to an icon. Barry isn’t just a great songwriter, he’s a pretty good landlord, too. When I lived in Manchester, he made sure the rent on the old Bee Gees childhood home was affordable for skint musicians. In a cruel, capitalist world that stifles any creativity it can’t commercialise, it’s hard for artists just to stay alive. Barry is one of the good guys. Cheers mate. We’ve put you on the guest list.”

“Steve managed to get the very best out of us,” they say of the process. “We’ve created all of our releases with him because we just love working with him so much. He is a talented, compassionate and supportive bloke, and he welcomes our freewheeling, excitable and sometimes confusing approach to songwriting. Above all, he truly understands what we’re trying to do with this band.”

Days after the band finished recording the album, the whole place flooded and the first incarnation of the studio was buried in a watery grave. Rock Spirit Absolute Joy was the very last music to be recorded in those four walls before disaster struck. “We will always remember that place and our time there,” say WACO. “The experience feels even more precious now knowing that it will never be repeated.”

Luckily, a bigger and better version of Monolith Studios has risen from those damp and depressing ashes, and is now thriving in a different part of the building.

Consistently pushing the boundaries of punk as genre, Rock Spirit Absolute Joy sees WACO taking their “nothing is off the table” approach to genre experimentation from previous album Hope Rituals to another galaxy.

“We channelled all the things that we love about each other and love about rock music in this album,” explains frontman Jak Hutchcraft. “The album title, Rock Spirit Absolute Joy, is a good indicator of where our heads were at. We got the title from one of our fans, Mary, who had written those four words in the comments section of one of our music videos. It hit us like a ton of bricks. She’d bookended the phrase with lightning bolt emojis and it resonated with us in ways that I don’t think she anticipated. With that in mind, we then wrote these ten songs to celebrate life, communicate our emotions and be true to those four words and everything they meant.”

“Ultimately though, we wrote this album to further commemorate our beloved late bassist Chris Cowley and process our grief. He was all about rock, spirit and absolute joy. Chris, if you’re reading this, I hope we did you proud.”

Over the past 24 months the band continually defied the pandemic’s pitfalls and rounded out 2021 on a bumper string of live dates with Wife Swap USA, The Wildhearts, Snake Eyes and more. Winning over fans at any festival or support slot thanks to their diverse sound, WACO are time and time again proving just what a dedicated, indomitable, and hardworking force for good they are on the UK punk circuit.

Following a raucous appearance at Manchester Punk Festival earlier this year, the band will play a short run of July 2022 headline dates including an appearance at Wonk unit’s WONK FEST in London (see below for full listings).