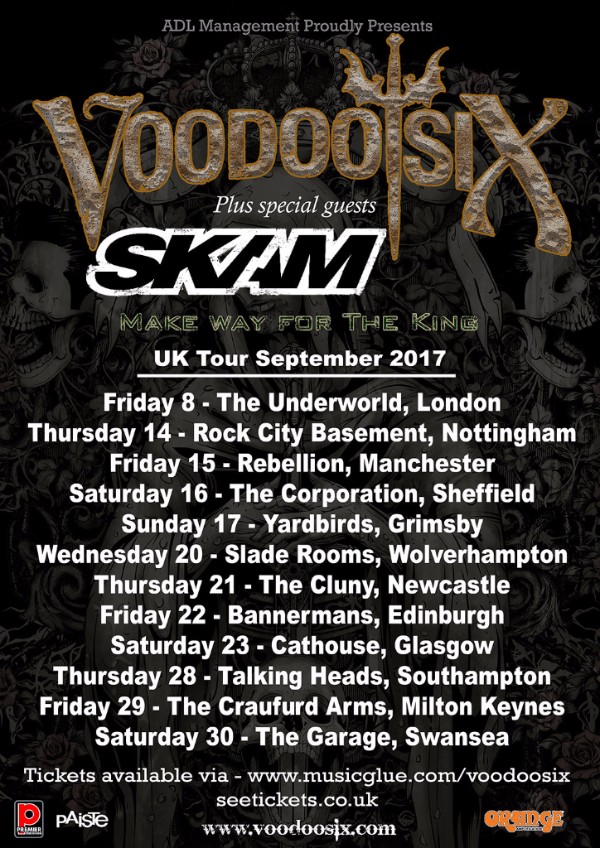 Straight off the back of releasing a new single, UK hard rock trio SKAM have announced that they will be heading out on the road with fellow Brit-rockers, Voodoo Six.

The dates run throughout September and take in cities across England, Scotland & Wales in what is sure to be a GREAT BRITISH ROCK TOUR.

Last week, SKAM released Fading Before The Sun, the first song to be taken from a brand new album, slated for release in November 2017; their third album will be a follow-on to their breakthrough second album, 2014’s Peacemaker and a raucous SKAM:LIVE album earlier this year.

Singer/Guitarist, Steve Hill, said, “We were so pleased with the reaction to Fading Before The Sun and now we will get to melt some faces with it across the country with our good friends in Voodoo Six. No doubt we will be playing more songs from our new album too, so we can’t wait!”

Fading Before The Sun is available via all good digital outlets and streaming sites.

The song is accompanied by a jaw-dropping lyric video produced by Unit 15 Productions.

Ahead of the dates with Voodoo Six, SKAM hit the road for a bunch of summer dates that includes WildFire Festival in Scotland & Ramblin Man Fair in Maidstone.