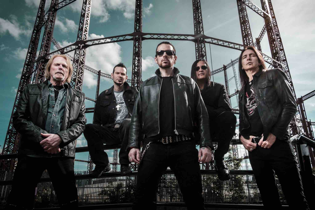 Off the back of the extremely successful album “Heavy Fire” and UK/European tour, Black Star Riders are pleased to announce a new worldwide deal with Nuclear Blast Entertainment.

Formed in 2012, Black Star Riders signed their first contract with Nuclear Blast Entertainment in the same year. Under the banner of the independent label, the band released three critically acclaimed albums: “All Hell Breaks Loose”, “The Killer Instinct” and “Heavy Fire”.

The band had the following to say about re-signing to Nuclear Blast Entertainment:

“Nuclear Blast have been there since the inception of Black Star Riders…believing in the band and most importantly the songs…after three very successful albums it’s a no brainer for the band to stay where we belong.” – Ricky Warwick

“NBE are one of the best labels I have ever worked with.  I am thrilled to continue Black Star Riders relationship with this great group of people!” – Scott Gorham

“What a pleasure working with the entire team at Nuclear Blast over the past five years. We look forward to the next five and beyond.” – Damon Johnson

“So thankful to be apart of the Nuclear Blast family! Looking forward to our future together.” – Robert Crane