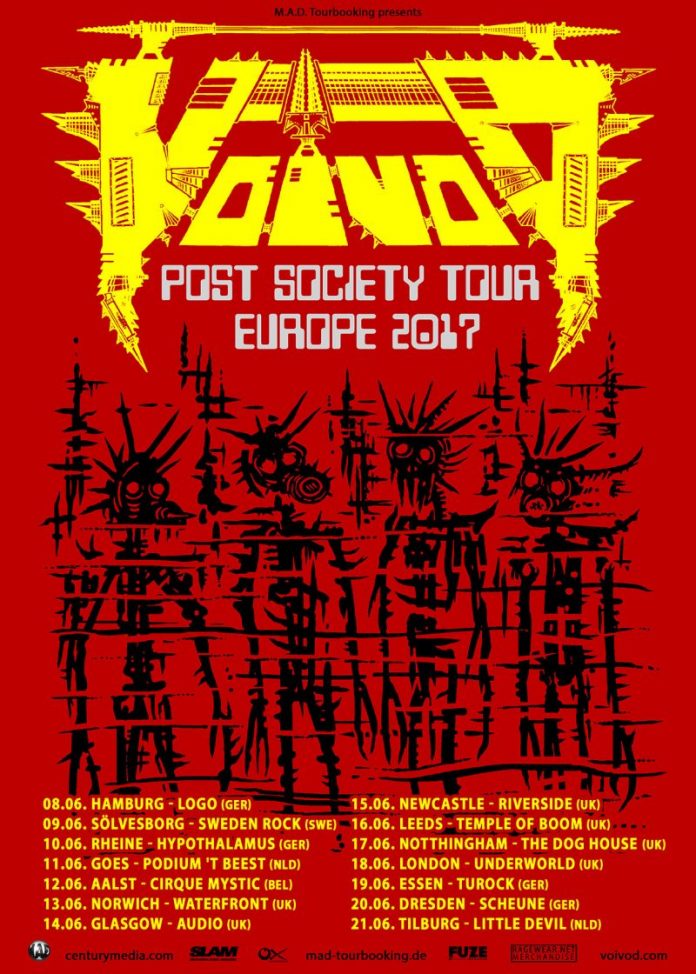 Progressive sci-fi metal innovators VOIVOD continue to promote their latest Mini-CD release entitled “Post Society – EP” and have therefore just announced a next string of live-dates, which will see the band playing festivals and club-shows in Europe throughout June as well as selected dates in their Canadian home afterwards, including an appearance as support to Metallica in Quebec City.

VOIVOD drummer Michel “Away” Langevin checked in with the following comment about the band’s upcoming activities, which include working on their upcoming studio album release:

“The writing of the new album is nearing completion, but it is already time for us to fresh up the set list for the first leg of our European tour in June. I am especially excited to play Sweden Rock once more. When we played there in 2009 I got to watch UFO performing a stellar set. This time we are sharing the stage with other heroes of mine, Lucifer’s Friend!

We will come back home to play some cool shows in July, including the Quebec City Summer Festival with Metallica. In August we will record the new album before playing the famous Wings of Metal Festival in Montreal in September. Then we will head for Europe again in the fall. See you soon!”

Here is a list of the currently confirmed shows coming up for VOIVOD, with further dates for the June “Post Society” run and the Fall dates to being announced soon:

VOIVOD’s “Post Society – EP”, which followed up 2013’s acclaimed “Target Earth” album release, is available as Digipak CD and as Digital Download. It contains 5 studio tracks with a total playing time of 30 minutes. The artwork was traditionally created by VOIVOD drummer Michel “Away” Langevin.