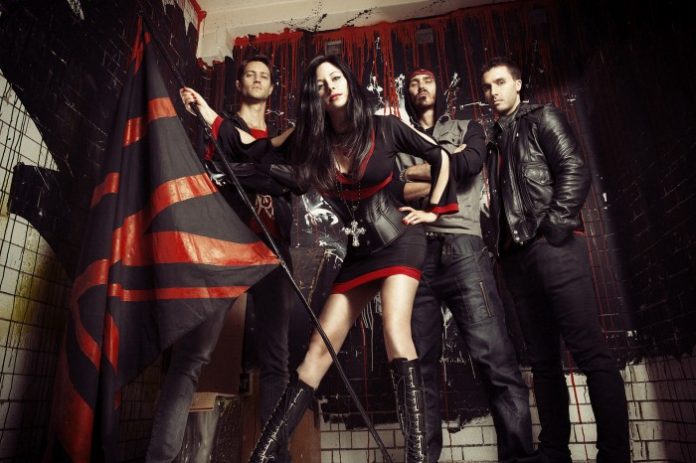 Metallers off to the strip for serious subject matter

In spite of the song’s serious subject matter, the visuals that accompany it are typical of Sanguine’s imaginative, fun and totally DIY approach to video making. Following on from last year’s single ‘Social Decay’ (which saw the band splice themselves into notorious 1936 propaganda film ‘Reefer Madness’, and rack up more than 18,000 YouTube hits), the ‘Pretty Girl’ clip was shot amongst the neon lights of Las Vegas. Capturing the sleazy undertones and sensory overload of a stroll through the 24-hour party town, it perfectly complements the frenetic, high-energy feel of the song.

On writing the track, Tarin comments “part after part just seemed to bounce out of my brain, it came from the heart so it was easy to write. It’s a song about female power, it’s a song about discrimination, and it’s biographical. I know there have been times in my life when my sex determines how I am treated, and the lyrics reflect my frustration that women are not meant to be both pretty and strong… but it’s more of a ‘fuck you’ than a complaint! I want to front a metal band, I’m 5ft 3in tall and I have breasts – who’s going to stop me?!”.

The video shoot happened over one wild night on the Vegas strip, eventually wrapping at 5am, by which time the band had “met some crazy people”, and booked a helicopter ride over the Hoover Dam and Grand Canyon to shoot the spectacular opening footage. Tarin says, “it was hard trying to shoot with people walking past on the Strip, but it was a lot of fun and the neon really summed up the seediness we were looking for. The whole helicopter ride was an insane experience and it was probably one of the best days shooting a music video we have ever had!”.

Sanguine’s second album, ‘Black Sheep’, will get a Europe-wide release on January 29th, through Odyssey Music. Recorded at In Flames’ Gothenburg studios, and featuring some cameos and co-writes from IF guitarist Jesper Stromblad, it’s a record that’s both highly distinctive and dizzyingly eclectic. With Tarin’s instantly recognisable banshee-howl-to-angelic-harmony vocal range drawing it all together, ‘Black Sheep’ dips into a dazzling array of influences to be by turns both brutal and beautiful, and predicts a very bright future for Sanguine.