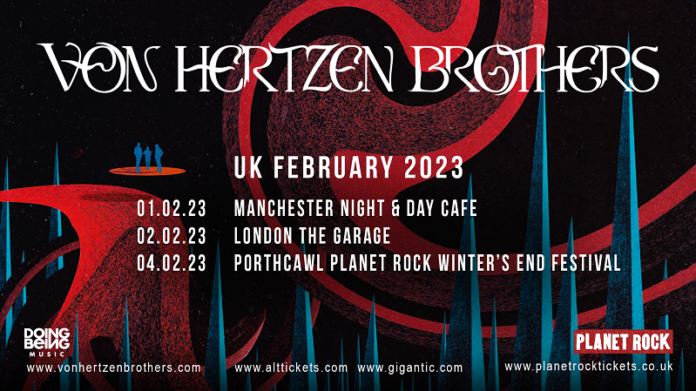 Can’t quite find the words to describe what Von Hertzen Brothers do?

Preceding their Saturday night headline slot at Planet Rock Winter’s End Festival on 4th February, the eclectic and untouchable VHB will also perform at Manchester’s Night & Day Café on 1st February and The Garage in London on 2nd February.

“We are thrilled to open the new year with a bang by coming over to the UK to headline Planet Rock’s awesome festival, Winter’s End. The Planet Rock audience has always been amazing, and I’d say it feels like coming home when you come to play at one of their events. We didn’t get a chance to play in Manchester last May and we’ve always had a great time playing in London, so we added those extra dates to our forthcoming trip. We are looking forward to playing our first gigs in the Kingdom. So far, we’ve only played in the Queendom. Hopefully all our fans can make it to (at least) one of these three shows!”says Mikko Von Hertzen.

The band’s latest album ‘Red Alert in the Blue Forest’ reached number 2 in the Finnish album charts upon its March release, marking their 7th top 5 album in their homeland.

The album’s underlying themes inspired a partnership with the Finnish Natural Heritage Foundation with the aim to protect 50 hectares of ancient forest (‘The Blue Forest’) using funds raised from the campaign. https://luonnonperintosaatio.fi/en/campaigns/blue-forest/

Drawing on elements of rock, folk, progressive and pop – the VHB live experience has been described as mesmerising, magical and thought provoking.

that can be delivered into a relatively scant 90 minute set.” – Louder.com

Tickets are on sale from midday on Weds 28th September 2022