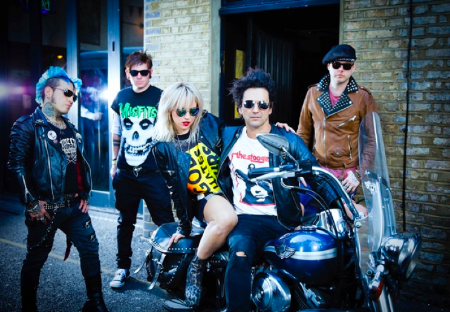 Love Zombies have announced the release of their playful power-pop anthem ‘Birthday’, which will be released on October 28th, and is taken from their forthcoming debut album Passionfruit which is due for release early next year.
The new single comes after the roaring success of their September co-headline tour with The Amorettes to coincide with the success of their recent pledge campaigns. The tour finished with two sold-out London shows; the first at the Black Heart sold out within a week of announcement, so a second at The Islington was later added.Formed by songwriters Hollis Mahady and Davey Fitzsimon, Love Zombies create a distinctive brand of pop, punk and new wave with a strong 60’s/70’s influence channeling the likes of Blondie and The Ramones.

Lead singer Hollis calls Love Zombies’ music high vibrational rock and roll and goes on to say that, “Love Zombies is more than a band to me. It’s a lifestyle choice. Choosing to live as a Love Zombie is waking up and choosing to try to live consciously on a daily basis from a place of love, empathy, compassion and respect for yourself and others. I try to incorporate these kind of important messages into our music in a fun, lighthearted and meaningful way.”

Hollis and Davey’s songs caught the attention of legendary producer Alain Johannes(Queens of the Stone Age, Eagles of Death Metal, Jimmy Eat World, Arctic Monkeys, Them Crooked Vultures, Chris Cornell, Eleven) and saw the pair fly out to Los Angeles to record the album bringing in the help of Joey Castillo (Queens of the Stone Age, Zakk Wylde, Eagles Of Death Metal) on drums.

With unforgettable melodies and catchy choruses, their energy, rawness and authenticity on stage has earnt them a formidable reputation and has seen them perform throughout Europe at many festivals including Reading and Leeds, Download, Groezrock, and The Warped Tour. Hollis’s intensity and performance on stage has been compared to a young Iggy Pop while her vocal range, in one phrase, can go from Courtney Love to Gwen Stefani. They have opened for acts such as L7, The Primitives, One OK Rock, Alkaline Trio, The WildHearts, H.E.A.T, Me First and the Gimme Gimme’s among others and toured the UK with the legendary punk band Stiff Little Fingers.

Backed up by their strong songwriting abilities, dedication and determination to their craft, Love Zombies have earned a dedicated group of followers known as the ‘Love Zombies Army’, which is evident in their Pledge Music campaign that soared to 200%.