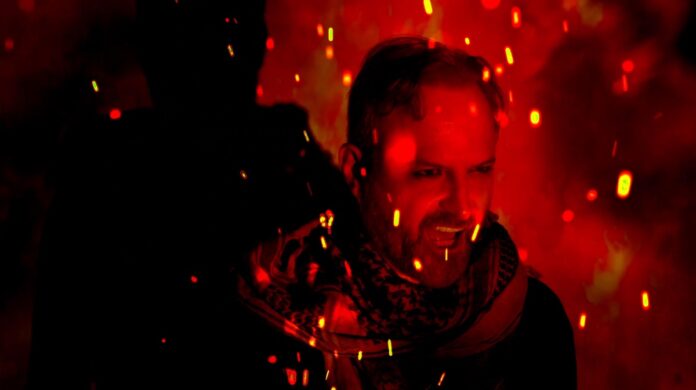 Industrial/glam-rock hybrid Terminal have just issued a video for ‘Godfire’, a song from their debut album ‘Blacken The Skies’, which was released via Metropolis Records in 2021. Showcasing the heavier, almost metallic side of the group’s sound, the track would sit well on playlists featuring the likes of Rammstein, Rob Zombie or Null Positiv, while Terminal frontman Thomas Mark Anthony has previously cited Killing Joke’s Geordie Walker as an influence on his own guitar playing.

‘Godfire’ is presented in trademark Terminal style with frantic visuals and confrontational lyrics, with words such as “Seethe in razor wire / as your palace is your pyre” a ‘j’accuse’ pointed at those bad actors who have taken the Ukrainian invasion as an opportunity to commit their own misdeeds while the world’s attention is elsewhere.

For Anthony, who was born in South Africa but raised in Canada, anti-apartheid issues remain tragically timely. The video for ‘Godfire’ is dedicated to Palestinian journalist Shireen Abu Akleh, who was recently killed by Israel’s defence forces while documenting their brutality in the West Bank. “Apartheid is unsustainable,” he states. “It will fall. We’ve seen it. But the longer it goes on, and the worse its atrocities, the harder it will be to have reconciliation instead of violent retribution.”

Previous article
GOT IT WRIGHT
Next article
SONIC SHAKERS