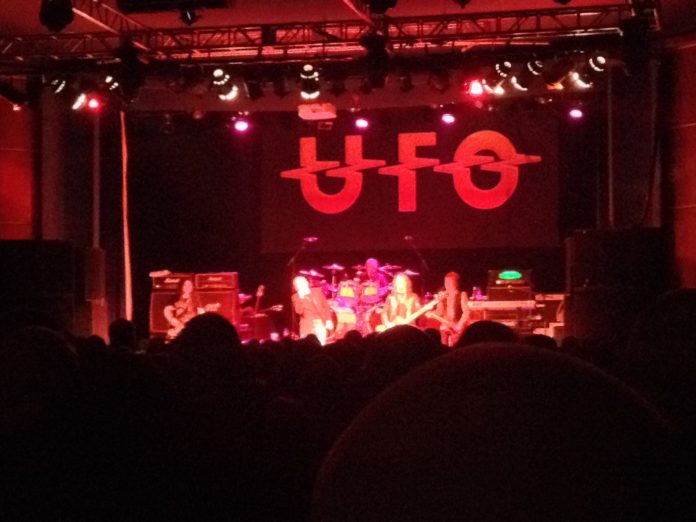 Phil and the boys continue their renaissance

Hailing from St. Petersburg, Reds’Cool are regular touring buddies with tonight’s headline act, having performed opening duties with them last year. Despite having hands down the worst band name on the planet the five piece can whip up quite the Hard Rock storm. What they do is effectively create timeless music that could have emerged at any point during the last 20 years. You know the score. On the fast ones, there’s a strident lead opening, a chugging verse, a catchy bridge and harmonies in the chorus, on even on the slow ones the guitars screech. They are at their best when they combine the two, as on the huge sounding “Love and Pain.” The fact that they sound quite like UFO makes them the right support here. Reds’Cool are also helped by their dual guitarists Sergey Fedotov and Lu Smirnov combining superbly to give some reasonable grit to songs like “Well Behind” and are better than the euro hard rock stereotype. Standout amongst these songs is title track of their most recent album “Bad Bad Story” which sees them cut loose and singer Slava Spark give it what you might call “the full Whitesnake.” Pretty cool indeed.

UFO singer Phil Mogg is ushering in the bands third track of the set” We’ll play something off the new album,” he says, looking like a cross between a gangster and charmer as he does so. After a mischievous pause he deadpans: “No, it’s not called for fucks sake, it’s called ‘Run Boy Run’.”

You have to love UFO. Calling them “stalwarts of British rock” neglects the fact that they still make brilliant music. So instead, let’s look at it like this: rather than trying to re-invent the wheel the band have decided that the wheel has worked just fine for this long and it doesn’t need much tinkering with.

Their new “Conspiracy Of Stars” record  (from which “…..”Run” is a high water mark) rather proves this point. Just like the rest of the stuff they’ve released in the last 10 years or so, it’s rather good and adds to their canon in ways that many bands of this vintage could only dream of their new songs doing

Like all bands of this age, UFO have to perform the “old v new balancing act.” They immediately get bonus points for including “Fight Night” as second track of the set and – you might need to whisper this under cover of darkness and with a balaclava on for disguise – that is MVM’s favourite of all their songs.

But however much they want to be – and are – a vital current act, and however much they evidently enjoy playing their more recent material – “Burn Your House Down” bristles with malevolent intent here, while the other “….Stars” song, “The Killing Kind” utilises Paul Raymond’s organ superbly – UFO know they have an unspoken contract with the packed audience to play those songs from the 1970s that everyone loved. So “Lights Out” swaggers in on the back of some magnificent Vinnie Moore guitar and “Venus” thumps and swirls like the most ambitious thing that’s been played tonight.

Anyone with a passing interest in rock n roll in the last 40 years knows “Only You Can Rock Me” and the enormous ballad “Love To Love” and if perhaps UFO’s legacy isn’t quite feted as it should be, it doesn’t make it any less true. That they can also play songs like the sleazy (“but it’s good sleaze” says Mogg) “Cherry” shows just what a back catalogue this really is.

“Rock Bottom” ends the main set, complete with usual stunning solo from Moore, but the usual hoopla of an encore is all but superfluous here, given that they haven’t played “Doctor Doctor” and “Shoot Shoot.” They duly do, and all is well with the world as a result.

These UFO shows are to Spring what Motörhead used to be to Autumn. You can rely on them to deliver as regular as clockwork.  Give or take one or two moments when the sound quality let them down this evening, tonight like they do every year, UFO prove beyond doubt that they belong in rock’s premier league. They are the classic rock band who are just about the best at still making classic rock sound classic.