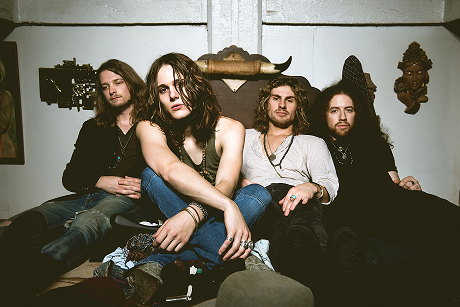 Tyler Bryant & The Shakedown, led into action by Texas-born vocalist / guitarist Tyler Bryant, will play a dozen European stadium shows as sole support to rock legends AC/DC in May / June 2016; in addition to these dates, some already sold out, TB&TS – purveyors of electrifying rock ‘n’ roll, loud an’ proud, with blues and alternative leanings also coming into play – have slotted in 10 headline appearances of their own.

This leg of the AC/DC tour will see 25-year-old Tyler, now based in Nashville, plus band-mates Caleb Crosby(drums), Graham Whitford (guitar) and Noah Denney (drums) visiting a number of European markets for the first time, including the UK where headline gigs in London and Nottingham have just gone on sale. In the space of five glorious weeks, TB&TS – no strangers to the dynamics of the larger, more spectacular rock show having already shared Stateside stages with Jeff Beck, ZZ Top, Aerosmith and more – will unleash their high-proof blend of melody, muscle and psychedelic mystique to well in excess of 600,000 riff-hungry fans across 12 different countries… the highway to hell, indeed!

TB&TS’s latest release, and first for Spinefarm/Varvatos, is a six-track EP called ‘The Wayside’; produced, recorded & mixed by Vance Powell (Jack White, Seasick Steve), these half-dozen tracks see the musicians showing the full scope and sway of their collective vision – from giant groove rockers such as ‘Stitch It Up’, ‘Mojo Workin’’ and lead single / video ‘Loaded Dice & Buried Money’ through the hypnotic swagger of ‘Devil’s Keep’and onto the atmospheric plea that is ‘The Wayside’, with Tyler’s background in the blues (he’s a recipient of theRobert Johnson Foundation’s ‘New Generation’ award, and studied under the late, respected Roosevelt Twitty Sr.) ensuring that raw emotion is never far from the surface. It’s a quality that stood the young musician, indeed the whole band, in good stead when they took to the road with ZZ Top main-man Billy Gibbons for his US acoustic tour in late 2015 / early 2016…

In addition to joining AC/DC for shows in Portugal, Spain, France, Belgium, Austria, Czech Republic, Germany, Switzerland & Denmark, and visiting the Netherlands & Poland for one-off headliners, TB&TS have the following dates lined up for the UK:-