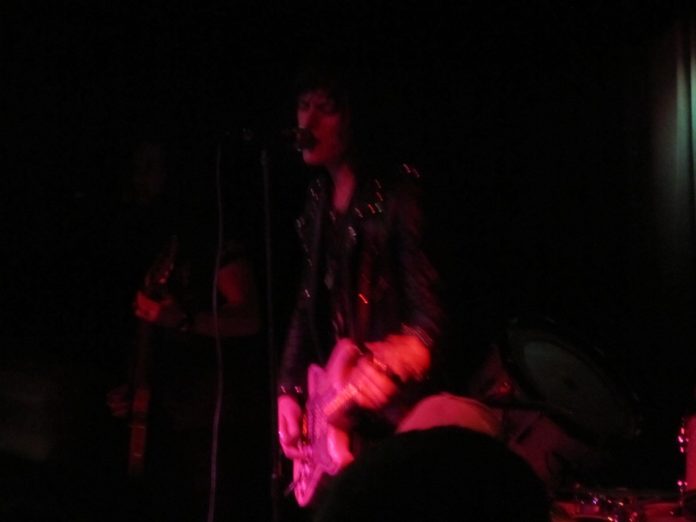 A few years ago, MV was absolutely certain that a band from Northern Ireland called Million Dollar Reload were going to be huge. Now, having seen Blackwater Conspiracy, we don’t want to jinx them by saying the same thing, but…. Most of BC, you see, were in MDR – led singer and lead guitarist respectively, Phil Conalane and Brian Mallon form the core here too – and the outfit are quite marvellous. Distinct from the band they were before, there is the feel of The Faces jamming on some Southern Rock about much of their half hour. “Waiting On Hollywood” builds into something groove filled and fun, “Monday Club” attacks the week as if it has much to do. Dan Baird would be proud to call “Roll The Dice” one of his own – but this is about more than just spit and sawdust ebullience. “Hanging Tree” and “Penny For Your Dirty Mind” both reveal an emotional, blues side, but it is the closing “85 Rockstar” that steals the show. Everything about this, from the organ of Kevy Brennan to the screeching solo and the slamming AC/DC-esque crescendo (which in effect is a bridge from Reload to now), suggests that Blackwater Conspiracy mean business. “Live fast, leave something beautiful” goes its chorus, and in years to come it might just be their defining statement.

“We told you last time we were here, Birmingham” says Nashville’s Tyler Bryant, “that we’d be back with a new album to play for y’all – and we keep our promises in the South”. “Well, unless you’re a politician” interjects Graham Whitford – and, in fairness, you can see both their points.

Bryant’s is rather more pertinent here, because he did say it – on one of the many, many support slots The Shakedown (and Bryant always refers to them as a band with that name) have played.

The recently released second full-length record is a cracker, and one which is going to propel the band from the supports (not that opening for Guns N Roses, AC/DC, Tom Petty and whoever else you can name has done them any harm).

That’s for the future, though, and the present sees them pack out this room first, with a crowd that are not waiting to be entertained, rather they are ready, know the words and are primed from the get-go.

There is a moment, in “House On Fire” – third song in, where he puts his fist in the air with sheer glee and it feels, in that second, that Bryant has arrived. Not, mind you, that the first two had been anything other than stellar – “Backfire” and “Heartland” are two of the finest things on that new album – its more that TBATS distil rock n roll into those five minutes.

And it is interesting that for all Bryant gets called blues (and on songs like “Downtown Tonight” – with its wonderful slide guitar from Whitford – he perfects that too) it is rather more than that. “Jealous Me” is trippy, “Aftershock” has an arena filling QOTSA feel, and “Easy Target” is just a thrilling adventure. The conclusion to draw from this is they are talented enough to do whatever they choose.

“Lipstick Wonder Woman” sees drummer Caleb Crosby bash his kit from the floor, “Weak And Weepin’” sees things end in a riotous fashion – and the vibe carries on through the encore.

“You Wreck Me” is a heartfelt tribute to the aforementioned Tom Petty, to find a different side to “That’s Alright Mama” is no mean feat, but they do, and ending with the new album’s highpoint “Ramblin’ Bones” is a masterstroke.

“We’d do this without ya, but it’s so much more fun when you come,” shouts a clearly thrilled Bryant at the end. The celebratory mood (the gig amounts to a coronation in places) means that although rooms like this and not the mega stages might well be their natural habitat, soon Tyler Bryant will be a huge guitar hero and The Shakedown aren’t going to have any choice in the matter.