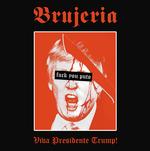 “The song (‘Viva Presidente Trump!’) was on shelf for years with no idea for vocals,” states vocalist Juan Brujo. “It was gonna be an ‘Anti-Castro’ part II song but nothing came out of it. It just needed proper motivation to go and attach itself to someone… and Trump came thru!”

“I see Trump as the white republican version of Juan Brujo circa ’93. Wanting to start shit for the hell of it! That’s why it’s called ‘Viva Presidente Trump!’ We both want same thing! So much that I want to be his running mate!”

Check out the visualizer for ‘Viva Presidente Trump!’ here:

BRUJERIA‘s last full-length effort, »Brujerizmo«, came out in 2000 via Roadrunner.